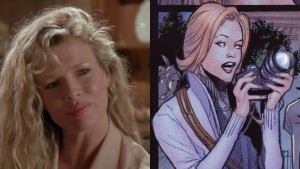 This past season of Gotham saw a mass inclusion on many of the rogues from Batman comics. Although we are still dealing with a relatively young Bruce Wayne on the TV show, we have already seen rather intriguing origin stories for many villains that we know and love including Mr. Freeze, The Order of Saint Dumas, The Court of Owls, possibly The Joker, and even The Mutants. Gotham has been quite creative in how they incorporate many fan-favorite items from the DC Comics lore while also maintaining their own creative freedom to make interesting stories separate from the comic.

When first introduced to mainstream audiences in Tim Burton’s Batman in 1989, fans were drawn to Kim Basinger’s take on Vicki Vale. She was new to the city of Gotham, young, and eager to make a name for herself in the world of journalism. Her investigations drew the attention of many of Gotham’s underworld who would rather remain in the shadow, and subsequent attacks on her led her to confrontations (and eventually dating) Batman/Bruce Wayne. It should come as no surprise that Gotham will be introducing Vicki Vale in Season 3 of the show.

A recent casting call called for a recurring role of “ambitious young journalist” in her “late-20s.” It has just been confirmed that this role will, in fact, be Vicki Vale. While there will be an age difference between the late 20’s journalist and the still relatively young Bruce Wayne, it appears that a love affair is not on the horizon for the show. This will give her a chance to stand out on her own and display her journalistic skills.

In addition to Vicki Vale, Solomon Grundy is rumored to appear next season, and possibly a return of Jerome. There also has been a casting description for a villain who “learns people’s secrets and manipulates them to do his bidding” and a young villainess “who uses her sexuality to entrap men.” Now who could those characters be? Sound off in the comments with your thoughts.