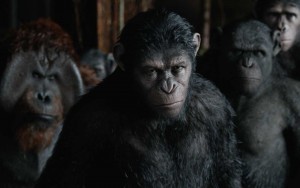 Fans in attendance to the War for the Planet of the Apes panel at NYCC were treated to the first official trailer for the film, which has still yet to be released publicly. As such, I will break down the trailer for your reading pleasure below.

The trailer opens with a wooden bridge made behind a waterfall, we hear some military chatter over walkie-talkies. The footage then cuts to military personnel in spec-ops outfits and rifles with green laser sights walking crouched in a cave, the military chatter over comms continues. They are then attacked by Caesar, who takes them all out. The person on the other end of the radio wants the squad to report in, Caesar picks up the line to listen. The trailer cuts back outside on the bridge, where another guard is looking around. Caesar comes out of the cave and lunges at the guard. Cut to action montage in the snow, voice-over from Woody Harrelson’s colonel character. The brief action showcases the film will definitely have grand war scenes, with humans in tanks, apes on horseback with guns, the whole deal. Final shot is Caesar kneeling before the colonel who places a gun against Caesar’s forehead. Harrelson’s voice-over continues saying “If humans should lose the war, this will truly become a planet of apes.” (Fantastic ‘he said the title’ moment).