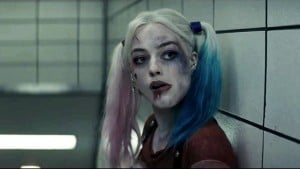 As the summer movie season kicks off into high gear, were almost done with most of the superhero films. The next one that has fans buzzing is Warner Brothers’ Suicide Squad directed by David Ayer. The upcoming anti-hero film seems like it will surely be a hit. While many of the new “heroes” are relative unknowns to the masses, one exception is the Joker’s accomplice Harley Quinn. As a result, all eyes are on actress Margot Robbie’s take on the beloved character. There’s already talks of a potential spin-off film surrounding her character in the works as a result.

In the latest issue of Entertainment Weekly, the ladies of Suicide Squad are profiled and actress Margot Robbie was asked about Harley Quinn:

“David [Ayer] really wanted her to be strong, badass and nuts – but fun as well. Whenever I would be inclined to play into the comedy or play her more likable, he’d always direct me the other way. He wanted her to be pretty vicious.”

Sounds like one moment we will have a funny loveable character, and at a whims notice will do something completely insane and vicious.

The other ladies discussed their characters including Katana (Karen Fukuhara), Enchantress (Cara Delevingne), and Amanda “The Wall” Waller (Viola Davis) who spoke of being a “badass” without having to use superpowers.