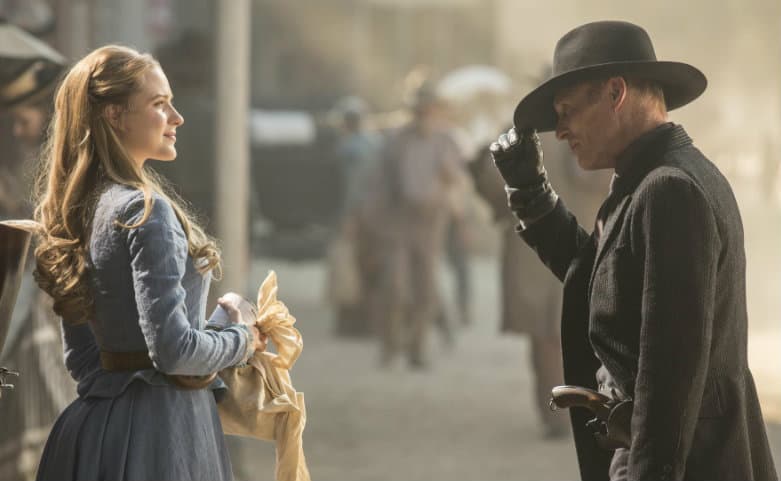 Like the consciousnesses of its robot hosts, Westworld came online slowly at first, then all at once. "The Original," the first hour of HBO's new sci-fi drama, an adaptation of Michael Crichton's 1973 film, hit all the right notes its premise and marketing advertised. While dense and perhaps even impenetrable to some viewers (a similar criticism lobbed at the early seasons of Game of Thrones), it came alive as the story touched on ideas of artificial intelligence, human nature, and the how consciousness comes to be. These ideas are at the center of the human experience and, make no mistake, they are the real stars of this show. The question now is: can the season follow through on the promise of this episode?

Oh, and the sweeping intro cut to the music of Ramin Djawadi? That's not only epic music, that's the the sound of HBO playing the Thrones-Westworld connection to the hilt. 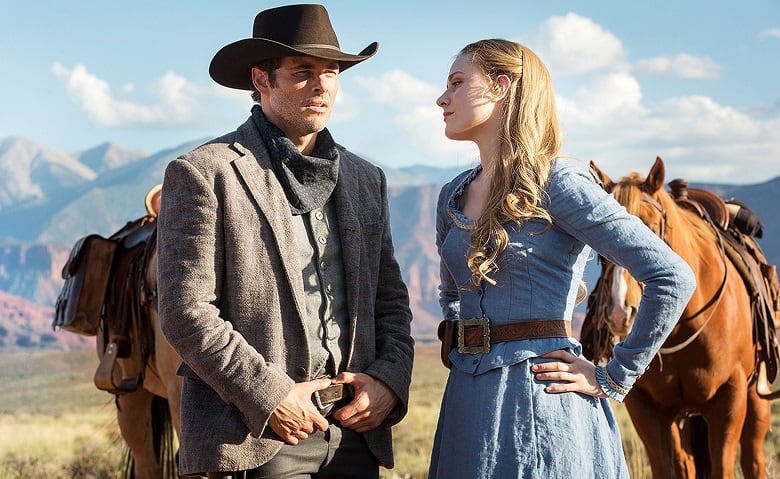 The basic problem of most robots-run-amok stories is that the process of getting to a mecha-uprising is a long and laborious one. The robots can't just "wake up" one day and know everything (well, they can if its a movie, but that's my point). In long-form storytelling, they have to reckon with their forced delusion. Humans are awful at doing this and, consequently, robots should be and are as well.

Dolores (Evan Rachel Wood) is one of the oldest "hosts" of Westworld. She's a country and daddy's girl who rides into town, meeting several of the guests (termed "newcomers") who visit the Western town at the center of her virtual reality.

The show has fun with its premise and in its interactions between hosts and newcomers. Hosts are incapable of hurting any living thing, even the flies that wander the town and creepily crawl all over their unaffected faces. One of the inherent strengths of this show is the multiple layers to any interaction. There's the flashback that begins the episode and the different realities occupied by the robot hosts (the protagonists) and the human overseers/guests (the antagonists). It displays this to full effect introducing the show's villain, the Man in Black (Ed Harris).

It's a surprisingly arch role for Harris (who THR reports may only have a two-year contract for the show, possibly indicating the length of his involvement), one with little initial shading. The aftercredits featurette on the scene implies this is intentional on the part of the writers and the character himself, who is emblematic of the POV shift from film-to-TV, going from a human-killing robot to robot-killing human. He's a 30-year veteran of Westworld who actively seeks to fill the role of a Western evildoer, adding another meta-layer to the character motivations.

During the introduction to Westworld, we witness a few robots malfunction, which Lowe speculates is because of the most recent software update courtesy of park creator Dr. Robert Ford (Anthony Hopkins). With over 30 years since the park's last "critical failure," (what that failure entailed is left ambiguous), Cullen immediately moves to handle it. With Stubbs' security detail in tow, Lowe goes to check on a malfunctioning unit in underground storage, where the coolant has leaked and flooded parts of the room

They find Ford already testing the unit, a hard-drinking prospector who turns out to be one of the first. This already seems like a perfect role for Hopkins. Beyond being a beloved British actor and the living definition of gravitas, his boredom with his own acting roles gives Ford the distant edge he needs to serve as the "God" of Westworld. There's a Dr. Manhattan feeling coming off of him, a detachment that makes me wonder, given the scale of his accomplishment: has Ford moved beyond his creation? And what are his plans if he has?

Back in Westworld, Groundhog Day is in full effect as the daily cycle begins again, this time with slight differences. Teddy Flood (James Marsden) skips a couple of his preordained moments and is stopped from reuniting with Dolores as per usual. Instead, she has another (decidedly less violent) encounter with the Man in Black. His goals, beyond wanton sadism, remain clouded throughout the episode, but as an RPG enthusiast, I got the strongest vibes of character creation from this guy (in the beginning, an unnamed guest refers to 2 weeks spent being "straight evil" in Westworld as the best of his life, reminding me of every friend I've had who told me the same about playing Skyrim or Knights of the Old Republic). This is reinforced by his stated desire to reach the "deeper game" of Westworld and essentially level-up.

Meanwhile, one of the storylines available to guests (one of whom is played by character actor Currie Graham) - to hunt the outlaw Hector Escaton (Rodrigo Santoro) - runs into trouble when the town sheriff leading the mission has what amounts to a robot stroke.

The malfunction goes to new heights when Dolores' father stumbles across a modern photograph left accidentally by a visitor. She brushes it off but it starts a trend of the hosts actively questioning their reality and the five stages of grief that come with the burgeoning, awful truth. One problem the series faces is making this purposefully-repetitive slow-burn dramatically exciting. We'll see if it meets the challenge. In the lab, Bernard tests the broken town sheriff while Cullen and Sizemore stress about how "unscripted" the narrative has become. Cullen is obviously the controlling type and seeks to impose absolute order on the chaos of the park. Clearly she never heard that "life, uh, finds a way." Sizemore meanwhile is overtly concerned with the integrity of the story he's written, rather than the people/robots involved in them.

He argues that Lowe and Ford are so obssessed with "life-like" robots they haven't stopped to wonder if that's a good idea or if it's even what newcomers want from Westworld. He throws his support behind the coldly pragmatic Cullen. Westworld can't possibly be all there is to A.I. technology. Hello Corporate Greed! I wondered when you would show your face.

Sizemore's speculating raises a good question: what's going on behind the scenes? What is the world like outside of Westworld, a world where A.I. is not only real, but commonplace? The pilot doesn't answer these questions, but it raises them.

Bernard goes to meet with Ford to inform him of the update mistake. He is in his lab, where his machine is producing a "host." Ford pontificates on the end of human evolution. I immediately recalled the legendary quote, “When Alexander saw the breadth of his domain, he wept for there were no more worlds to conquer."

But, of course, we know this is the opposite of an end; it's the beginning. The malfunction reaches Dolores father. Triggered by the photo discovery, he interrupts the morning routine with Dolores to urge her to leave "Hell" before having a robot stroke. She flees for help and finds Teddy in town.

Meanwhile, Sizemore has reworked the Hector storyline so he attacks the town, providing cover for Bernard to reprogram the malfunctioning hosts. In the aftermath of a massive shoot-ut, they're brought in for review the off-line models, including Dolores and Teddy. At this point, the show returns to its opening, with Dolores under questioning.

Ford visits her father and recognizes him as an earlier creation who has "played" several different roles in the iterations of Westworld. The malfunction had triggered him to access old personalities thought deactivated and forge a patchwork of memories, fragments of prior "builds." An identity. A consciousness.

Lowe notes they're "way beyond a glitch here" and the current drive is "off-script." When Ford activates his current personality, the host demands to meet his maker (Ford) and to get "revenge" on him. He's subsequently deactivated and hauled off to storage. Ford is cavalier about the whole thing, especially since he literally utters the phrase, "old work coming back to haunt us."

Meanwhile in Westworld, Dolores has a new dad and is none the wiser. All is well . . . except for the fly she swats and kills, the first living thing killed by a robot (that we know of). Yeah, Robert, I'd be a bit more worried if I were you, buddy.

That's a wrap for our first Westworld review! Did you like the pilot enough to stick around next week? What most interested you? Make it rain in the comments and I'll see you again for a return trip in a week!