A Wonder Woman display featuring both the title character and her arch nemesis, Cheetah, signed by both Gal Gadot and Kristen Wig, has surfaced online.

‘Her’ & ‘Lost In Translation’ Production Designer Boards ‘Birds Of Prey’

The image shows Wonder Woman and Cheetah fighting in what appears to be a jungle. Cheetah is clearly the aggressor as Wonder Woman prepares for a counter attack. Kristen Wig and Gal Gadot’s signatures can be seen above the artwork, which you can check out below. 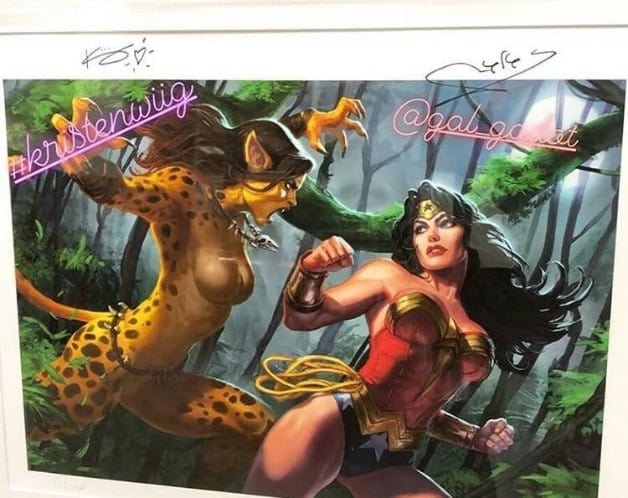 From the look of things, this artist is looking forward to seeing the two battle in the next film.

What do you all make of this image? Are you looking forward to seeing Wonder Woman battle Cheetah? Would you have rather seen her in a story that takes place in a contemporary setting? Would the jungle be a good place for them to battle or should the two stick to more urban combat? Let us know what you think in the comments below!

Full details on the Wonder Woman 1984 plot are currently unknown, though the film will follow the titular hero as she comes into conflict with the Soviet Union in the 1980s and encounters a formidable new adversary named Cheetah.

Heroic Hollywood has unveiled new photos from the Aquaman press junket, offering fans a close look at the costumes, weapons, and creatures in the DC film.

Warner Bros. and DC's Aquaman will arrive in theaters soon and the recent press junket for the film included a gallery of several items featured in the titular hero's cinematic feature. Among the items on display are Arthur Curry's trident, Vulko's costume, an important map, and bits of the underwater creatures.

Are you excited to see the DC film hit theaters? Share your thoughts in the comments section below!