DC Comics’ latest issue if Wonder Woman has redefined and renamed the iconic Lasso of Truth.

Initially conceived by Wonder Woman creator William Moulton Marston as both a weapon and a tool used to elicit the truth from bound individuals, the concept of using the lasso as a means of seeing into someone’s soul was first explored during Gail Simone’s Wonder W0man run. Now, issue #55 of the DC hero’s comic book series has expanded on the concept in a story that follows Wonder Woman as she tries to convince Artemis to return to her side following the latter’s decision to align with Rustam and the Bana Mighdall tribe in the war on Qurac. Recognizing the conflict within Artemis, Wonder Woman wraps the lasso around her former ally and consequently connects their souls on an astral plane.

In this plane, Diana is able to convince Artemis to return to her side because the DC hero is can converse to someone’s soul and connect to the truest version of the individual. In fact, the astral plane shares the same name Diana gives the famous lasso: The Golden Perfect. 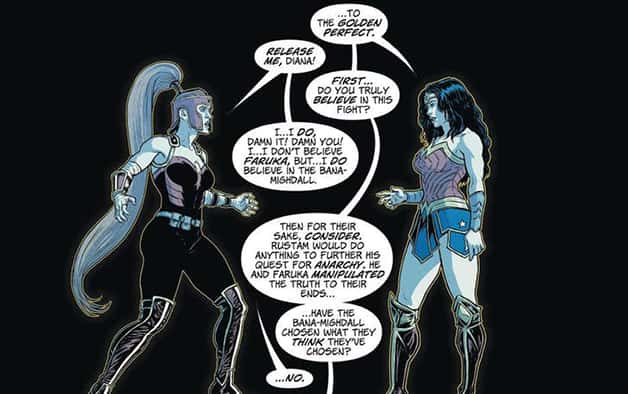 What do you think of the updates to the Lasso of Truth? Share your thoughts below!

Then, two armies stand ready to annihilate each other, with Wonder Woman and Artemis caught in the middle, fighting for the souls of the exiled Amazons living in Bana-Mighdall! Does Diana possess the might and diplomatic prowess to convince her sisters to stop their march toward war? Who will fall beneath the flaming swords of Rustam? And more importantly, how does she make sure this doesn’t happen again? Will Diana have to Occupy the Amazons?!