A new look at Wyatt Russell’s US Agent in The Falcon and The Winter Soldier has been released ahead of the show’s Friday premiere on Disney Plus.

The Falcon and The Winter Soldier is only days away from its debut on Disney Plus, and fans still have many questions heading into the series. One major mystery is what kind of role Wyatt Russell’s US Agent will play since he has been relatively absent but teased in marketing.

We have gotten a good look at Wyatt Russell’s US Agent suit thanks to set photos and promo art, but nothing more than that. It looks like we’ll have to wait a little bit longer for a proper look at US Agent’s suit in The Falcon and The Winter Soldier as USA Today shared a new image of Russell as John Walker in his Marine suit. You can check out the new image below: 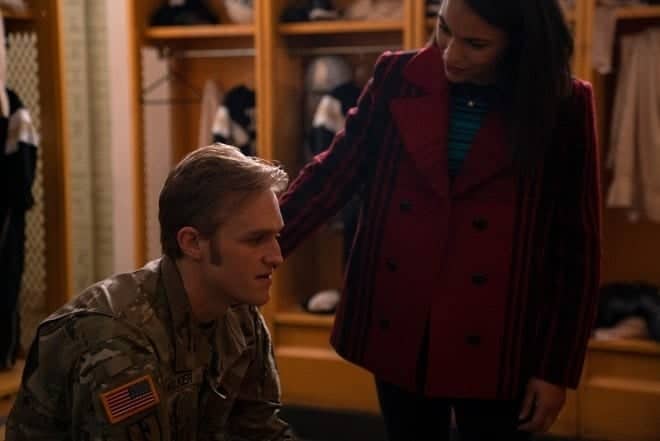 Wyatt Russell also talked a little bit about what US Agent will add to the legacy of Captain America:

“John Walker wouldn’t be in this series if he was causing everything to go well. There’s a dynamic he adds that somewhat complicates the relationship of everybody involved. The shield doesn’t itself represent something that’s singular. It represents what somebody puts on it. So one guy puts his own version of what Captain America is on it and another person puts a version of what it is.”

Series creator and head writer Malcolm Spellman also teased what US Agent represents in The Falcon and The Winter Soldier:

“Walker speaks to this idea of American exceptionalism and the necessity we have in questioning it.”

How do you think US Agent will get Captain America’s shield in the series? Speculate below!

Here is the official synopsis for the Marvel Studios series:

The Falcon and The Winter Soldier will premiere exclusively on Disney Plus on March 19, 2021. Stay tuned to Heroic Hollywood for all the latest news on the future of the Marvel Cinematic Universe, and make sure to subscribe to our YouTube channel for more content!