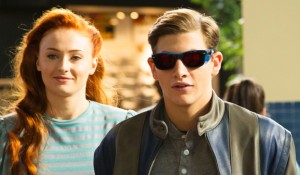 After early interviews surrounding X-Men: Apocalypse speaking about Jubilee’s powers, fans were disappointed with the final cut of the film when Jubilee’s presence was barely even noticed. In interviews after the release of Apocalypse we learned that much of her character, as well as development for the other young mutants in the film was cut in an extended mall scene– which has finally been released to the public.

The scene, almost entirely finished in terms of special effects (barring one moment), should have been in the final cut of the film as far as I can tell. Not only is it an extremely fun sequence, but we get to learn the personalities of our young X-Men a bit better as well. Also Jubilee gets more to do than make a comment about Star Wars, and actually use her powers.

The deleted scene, which you can view below, only runs for about 3 minutes, but of course the first things cut from a bloated film are character moments.

Following the critically acclaimed global smash hit X-Men: Days of Future Past, director Bryan Singer returns with X-MEN: APOCALYPSE, opening in theaters everywhere May 27, 2016. Since the dawn of civilization, he was worshipped as a god. Apocalypse, the first and most powerful mutant from Marvel’s X-Men universe, amassed the powers of many other mutants, becoming immortal and invincible. Upon awakening after thousands of years, he is disillusioned with the world as he finds it and recruits a team of powerful mutants, including a disheartened Magneto (Michael Fassbender), to cleanse mankind and create a new world order, over which he will reign. As the fate of the Earth hangs in the balance, Raven (Jennifer Lawrence) with the help of Professor X (James McAvoy) must lead a team of young X-Men to stop their greatest nemesis and save mankind from complete destruction.

X-Men: Apocalypse is out now digitally and will hit Blu-ray, 4K, and DVD on October 4th.