What The Year Of The Superhero Rivalry Says About 2016

Acclaimed novelist Toni Morrison once said, “All good art is political. There is none that isn’t. And the ones that try hard not to be political are political by saying, ‘We love the status quo.'” Whether we like it or not, 2016 proves her right. Not even superheroes are immune to politics (Marvel vs. D.C. anyone?).

So far, 2016 has seen Daredevil fight the Punisher, Batman battle Superman and, next month, Captain America will duke it out with Iron Man. What makes heroes fighting each other so compelling and why is 2016 seeing it happen in superhero stories? 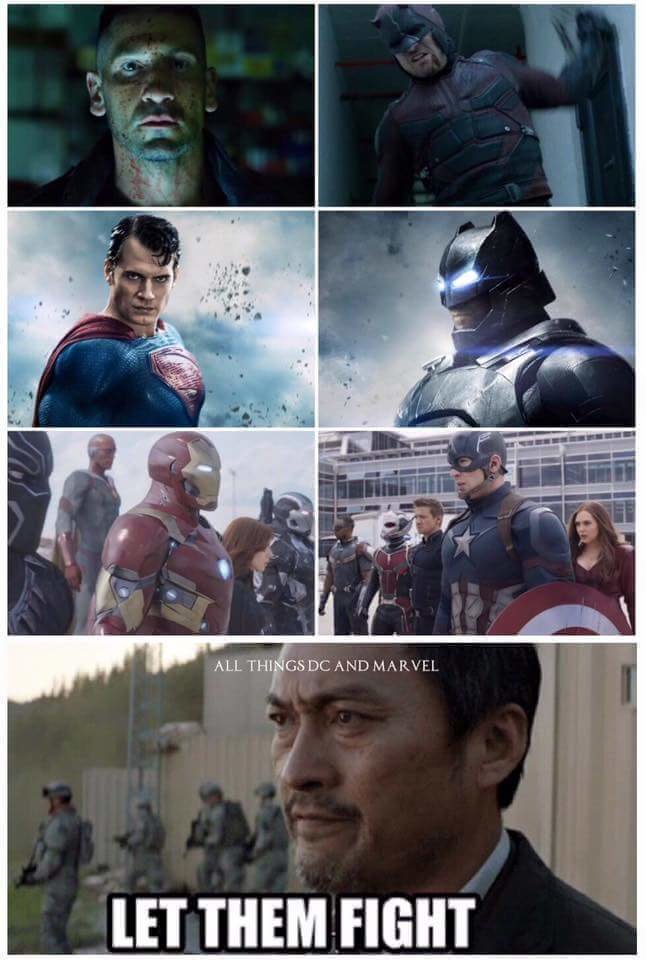 Well, first, it’s more like our real world.  In reality, there are no heroes or villains, super or otherwise. Just flawed humans in conflict. When stories are no longer preoccupied with good and evil (at least, not entirely) but ideologies, it makes them more open for interpretation and discussion.

Second, these are characters we care about, at least in theory. One reason the D.C. cinematic universe has failed thus far in comparison to Marvel’s is that the latter spent eight years methodically building a universe and character relationships they could then gleefully topple in epic fashion (Civil War) and the former just didn’t (Dawn of Justice). Imagine Marvel as the kid who actually plays out stories with his action figures and D.C. as the ADHD one who just smashes his together.

Third, these rivalries can be about important issues. I think most people who aren’t Thanos, Darkseid or Donald Drumpf are against world domination, mass extinction and Earth exploding. But what about when the stakes aren’t quite so high? Are they against accountability? Do they think the ends justify the means? What is stronger: fear or hope?

This guy is betting big on fear

Three months into the year, I think I speak for planet Earth when I say the U.S. presidential election is one for the books. But it’s hardly news that America has become severely politically polarized. Nowadays, the country is dominated by “negative partisanship,” i.e. voters are more likely to vote based on who they hate rather than who they like.

What Morrison is saying in the above quote is that, simply by imparting information, a storyteller makes choices that shape a narrative. In a film for example, every move – from casting to shot composition to script and tone – is intentional and should be judged as such. It’s why reviewers hate the “turn your brain off” excuse. Despite or because of the critic’s job description to analyze a film by various qualitative criteria, some feel they are “ruining” the fun by overthinking blockbusters and other mainstream entertainment.

But the best art, especially the genre stories geeks like us love, always speaks directly to our own world. The implications of the stories matter. Before deconstructionism become an excuse to make things nihilistic and depressing to add “realism” (a certain superhero film released over the weekend comes to mind), writers like Alan Moore and Frank Miller used it to add context and weight in masterpieces like Watchmen and The Dark Knight Returns. Pop culture is a reflection of humanity, a playground that can allow collective imaginations to work out issues.

Let’s take a look at four hero vs. hero conflicts and what their rivalries say about our world. Click Next to start!