At this point, easter eggs in a comic book movie are practically essential, even if they’re not technically required. And Batman v Superman is no stranger to clever references that celebrate DC comics and its creators. We’ve caught nods to characters like Oracle and Darkseid, plus more obvious references like Perry White’s “It’s not 1938 anymore!” line, which references the very first issue of Superman.

But one fan in particular caught one of the craziest easter eggs I’ve come across for the film, and it’s even been confirmed by Zack Snyder. DC fans are well aware that Joe Shuester is one of the creators of Superman, and BvS pays homage to him in a more creative way than we’re probably used to.

On Twitter, @mas_critical pointed out the easter egg, claiming that the hole in a broken window looks like the Canadian province of Ontario, which is where Shuester was born (Toronto, to be more specific). 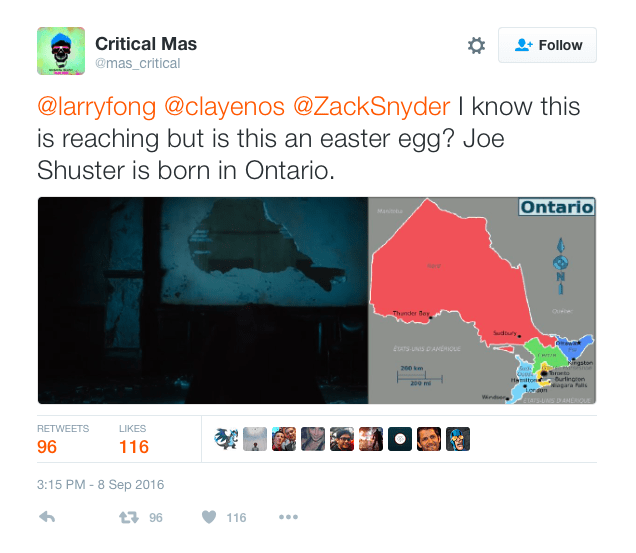 The post eventually made its way to Clay Enos, a photographer for BvS. According to Enos, he showed the broken window to Zack Snyder (whom he’s close friends with), and the BvS director confirmed that the easter egg is legitimate.

His response was: #finally someone noticed. That, of course, means there are probably dozens more harshly hidden easter eggs in BvS that are still waiting to be found. Assuming fans will manage to find them all.