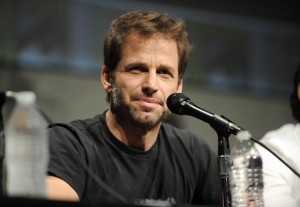 Love him or hate him, Zack Snyder is the director responsible for kickstarting the DC Extended Universe (DCEU). With directing Man of Steel, Batman v Superman: Dawn of Justice and soon to be Justice League, Snyder has had the most experience with the newly launched cinematic universe and bringing these characters to the big screen. While director David Ayer is responsible for the latest DC film Suicide Squad, it’s still a part of the world Snyder built. Snyder is also listed as an executive producer for Suicide Squad. Turns out he got behind the camera a little bit in the latest DC film.

Still with us? OK good. There is a flashback scene in Suicide Squad focusing on when Captain Boomerang (Jai Courtney) was captured before he was sent to jail. Turns out it was The Flash (Ezra Miller) who prevented Captain Boomerang’s bank robbery in a surprise cameo. This helped connect The Flash more into the DCEU. However, it wasn’t David Ayer who directed this scene, but none other than Zack Snyder himself.

The scene was always intended to be in the film, but was shot post-production in London while Miller was filming the upcoming Justice League film, Ayer was able to confirm.

“Flash was always in the movie, we just got lucky because Justice League was happening and they had the uniform, they had the assets, so we were able to get that photography.”

Rather than fly Miller to Los Angeles while filming Suicide Squad and waste some money, the studio opted to wait until Justice League was filming and use footage of The Flash and some movie magic to incorporate it into Suicide Squad.

Suicide Squad is in theaters everywhere.