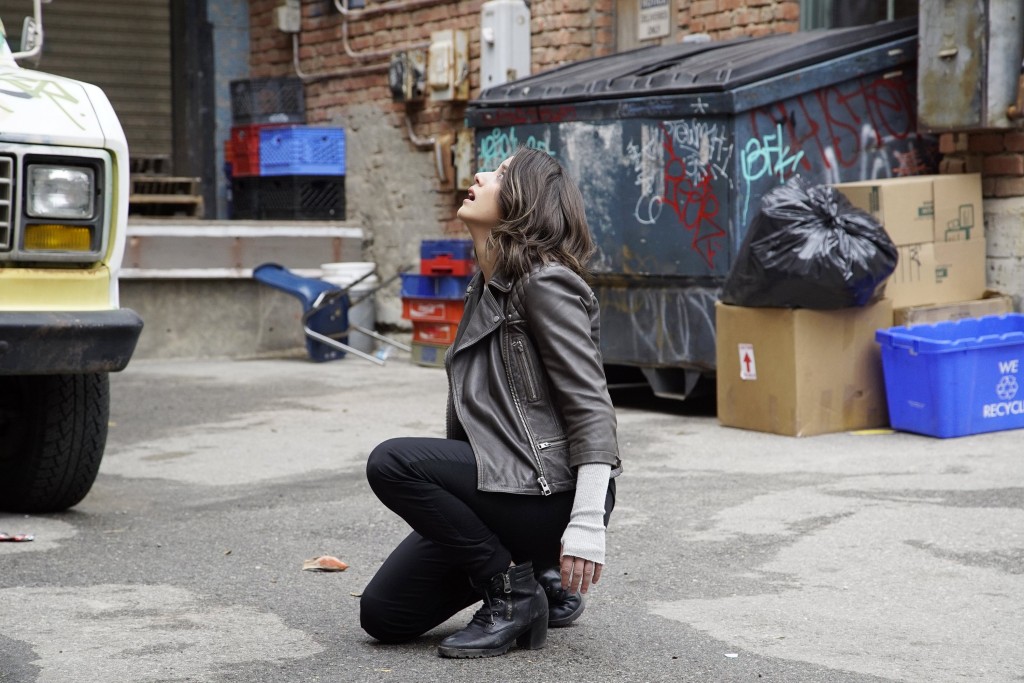 Last week I opened my review with a question asking if Agents of S.H.I.E.L.D. had any vision for what it wants to be. This week I’m here once again wondering the exact same thing. What story is this show trying to tell? What are its essential themes? What is the idea they are ultimately trying to communicate over 22 hours, one week at a time? We’re two and a half seasons into this series, nearly halfway through this particular story arc, and I haven’t the foggiest idea of any of those answers, and I’m not entirely convinced the show has the answers either. That puts me in a weird position, because I’ve actually liked these last few episodes quite a bit – an oddity with this show that I’ve threatened to quit at least three times a season. But while the episodes themselves have been solid, the larger arc of the season (or lack thereof) has left me frustrated. It’s a problem that comes into particularly sharp focus this week as the entire episode is about the unavoidable consequences of our actions.

While scanning through police radio chatter, the agents of S.H.I.E.L.D. pick up a call from a man in New York telling the police that he needs to speak with Daisy Johnson about an upcoming HYDRA attack. The man in question – a local business owner with no ties to Daisy or to S.H.I.E.L.D. – should have no idea who Ms. Johnson is, but when the agents arrive on the scene they find that the man received a vision of the future from a homeless man in the alley behind his store. More disconcertingly, the vision begins to come true right in front of the eyes of the agents.

The homeless man, Charles Hinton, is an Inhuman whose power manifests in the form of visions. Whenever another person touches him, the two share a vision that ends with a death, and when Daisy reaches for his hand as he’s being carted away by HYDRA, she is witness to a death that seems to be her own. Not only that, but the person doing the killing is none other than her friend and mentor: Phil Coulson.

The theme of the week is destiny and wrestling with the question of whether our choices have any meaning or if we’re fated to travel down a predetermined path. This plays out most obviously in the issue of Daisy’s vision and whether or not the outcome of what she saw can be changed, and it’s an issue that the agents of S.H.I.E.L.D. are of two minds about. Coulson, Daisy, and May believe that there must be some way to prevent the events foreseen, but Fitz insists that time is a fixed thing, with a future that’s already set in stone, and we merely perceive it as being fluid because we are unable to see beyond the minuscule portion of it that we occupy. In a broader sense, it’s the question of whether or not the concept of free will has any basis in fact or if it’s merely a comforting illusion to stave off the existential terror that our choices don’t matter and we’re merely unwitting components in some cosmic equation producing an unchangeable outcome.

On that same note, the question of whether Inhuman powers are truly random, or “designed” to fill a specific need at a specific time also comes up again. Daisy believes that she was given this vision for a reason, that she can use the knowledge gleaned from it to save Charles Hinton, that this power that has caused so much anguish could be used to achieve something good. It’s a notion that Lincoln supports, pointing out that the only reason they knew this guy was in danger was because of the vision that led the agents of S.H.I.E.L.D. to him in the first place. The only problem is that this would also mean more dangerous and even evil Inhumans like Lash and Hive are part of this design as well.

While all of this is playing in the realm of the big existential questions of the meaning of life and whether or not there is some higher power influencing our actions, it’s also more specifically a commentary on the nature of storytelling. The truth is, there is a higher power in the world of Agents of S.H.I.E.L.D., and that higher power’s name is Jed Whedon and Maurissa Tancharoen. They are designing the fates of these characters, and the roles each of them play in reaching that fate. That being said, from the perspective of this mere mortal, it doesn’t seem like they have a fixed view of the longterm scope of where this story is headed. Instead, they are allowing things to play out one week at a time with seemingly very little consequence carrying over between events.

The very thing that terrifies us in life – that everything we do is merely furthering some inevitable outcome – is paradoxically the thing that gives stories their meaning. While we value or concept of free will and the idea that we control our own destinies, in fiction all characters and all events should be subservient to some greater purpose. For Agents of S.H.I.E.L.D., though, that purpose is unclear. In a weekly TV series, you understandably can’t set the exact events of all 22 episodes in stone before you begin production, as you need to be allowed the freedom to shift things around based on audience response, but you should have a clear idea of where you’re going and have clear signposts on the way to get there. At this point, Agents of S.H.E.I.E.L.D. feels like it’s just meandering, hoping to figure it out somewhere along the way. Admittedly that’s an arrogant assumption to make as we’re not even halfway through this particular story arc, but based on this history of this show, it’s difficult to give them the benefit of the doubt. One only need look back as far as the beginning of Season Three to see this exact same arc play out. The season started with several solid, yet disparate episodes before eventually tying them together in a deeply unsatisfying way in the midseason finale. The early episodes were not leading to this place, instead an ending was reverse engineered out of the separate pieces that were already in play. Hell, this problem goes all the way back to the very first season where the show spent the majority of its time futzing around on completely tangential adventures before finally finding a real story arc in the last four episodes of the season.

Even within the metaphor of the episode, we see this problem. When the agents of S.H.I.E.L.D. finally infiltrate the facility where HYDRA is keeping Charles Hinton, all of the elements of Daisy’s vision are accounted for, but they are revealed to have been building up to a whole lot of nothing. The fateful inevitabilities glimpsed in the vision are handwaved away, and instead we get a series of images completely devoid of consequence. Coulson doesn’t shoot Daisy, but instead shoots the window behind her; Lincoln bleeds profusely from his head, but don’t worry, he’s fine; and someone does die, but it’s a character we’ve only just met and have almost no connection to. In fact, the emotional resonance is so low that it hardly feels inappropriate when we cut away from Hinton’s death to a ‘cute’ moment between Fitz/Simmons. Maybe if Daisy had been wrestling with some kind of emotional struggle of not being able to save someone, this death would have some kind of meaningful impact, but that’s not anything that the show has broached. Yeah, the agents of S.H.I.E.L.D. now know that the body of Grant Ward returned from Maveth, and yeah, Daisy got to see the cold open tease we got back in ‘Bouncing Back,’ but none of that has any real thematic weight to it.

Taken by itself, this episode is fun. Time paradoxes are a fun thing to explore in stories, and having the agents of S.H.I.E.L.D. attempt to plan a rescue mission while also avoiding their own fated deaths is an enticing concept. That being said, on a larger level, this is a huge missed opportunity. This is an episode dealing with time and causality – the inescapable grip of fate – and yet it is ultimately without consequence. By the end of the episode, the status quo has been restored, and we’re ready to go on exactly the same sort of adventure next week. That’s poison for long form storytelling. Long form storytelling provides an opportunity to see characters grow and evolve over time, to face changing situations and react to them in interesting ways. If everything just resets to zero at the end of the hour, then there’s ultimately no point to any of it. I want to see this show succeed in telling interesting, solidly constructed stories, but instead it seems content to just be the Marvel version of Law & Order or CSI or any other ‘comfort food’ show. A show that doesn’t ask much of your attention, and works within a consistent status quo making it ideal for drop-in-drop-out viewing. Maybe there’s a market for that, but if that’s their highest ambition, I’ll always find it disappointing.