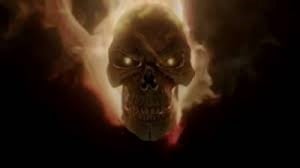 Earlier today we published the first look of actor Gabriel Luna as Ghost Rider AKA Robbie Reyes for Agents of S.H.I.E.L.D. The new character will be seen this season on Agents of S.H.I.E.L.D. when the fourth season premieres later this month. With the season premiere being titled “The Ghost,” it’s safe to assume we will be seeing a whole lot of his character this season as he interacts with the agents as well as the now-fugitive Daisy Johnsons AKA Skye. The show promises to continue expanding the Marvel Cinematic Universe (MCU) further into the world of magic and mysticism with the introduction of Ghost Rider.

Marvel just released a video of “found” cell phone footage where someone captures footage of Ghost Rider as he is driving away in the “Hell Charger.”

Robbie Reyes (Gabriel Luna) will roar into the lives of Agent Coulson and the team as a junkyard mechanic who can turn on a dime into the terrifying Ghost Rider. Will Robbie be a friend or foe to S.H.I.E.L.D. – as well as the world, itself? Meanwhile, Fitz discovers that socially awkward genius and friend Dr. Radcliffe (John Hannah) has started putting the finishing touches on a new, secret invention.