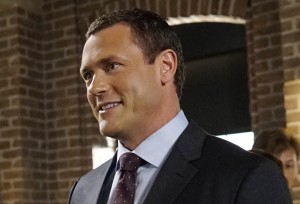 While viewers may not have met the much talked about but never seen S.H.I.E.L.D Director, played by Jason O’Mara, recent comments from star Elizabeth Henstridge confirm that the tension between former teammates caused by Phil Coulson’s successor will continue through the season. While little else is known about the new Director, Entertainment Weekly has released a new clip from Marvel’s Agents of S.H.I.E.L.D featuring the new Directors debut.

The footage features a meeting with the new Director, referred to as Jeffrey, Phil Coulson, and Melinda May. While viewers may have expected a stern demeanor from the Director, especially considering the animosity he has caused between his subordinates, the clip gives us a glimpse at a surprisingly amicable Director. Viewers may want to stick around to the end of the footage though, as a quick reveal suggests his cheerful disposition may be a facade.

You can view the full clip below.

In addition to the new footage, Entertainment Weekly spoke with executive producer Jeph Loeb about O’Mara’s casting and how the creative team wanted to give the new Director a different flavor than his predecessors:

“What would be the best way of introducing someone that we’ve never see before be the director of S.H.I.E.L.D.? And why; why him? Why is he the right guy for this? What’s been so remarkable is that Jason took the role and elevated it even further. It was one of those fun things where the writers room, which is so extraordinary, wrote a character, but when Jason gave it a voice, we went, ‘Oh, there’s a whole other level of fun that we get to play here.’”

While it may be awhile before viewers are given more details about O’Mara’s character, fans can continue to speculate on the Directors motive and secrets, especially since he seems to have a particular interest in Agent May.

In light of the Sokovia Accords, and with Hydra obliterated, S.H.I.E.L.D. has been legitimized again and no longer needs to operate in the shadows. Since the world presumes that Coulson is dead, the organization needed a new Director (Jason O’Mara) to be the face of the organization. Coulson finds himself back in the role as an agent and teamed with Mack (Henry Simmons), and together they are tasked with tracking down and confirming the presence of Enhanced people, aka Inhumans. They have been trying to track down and capture Daisy (Chloe Bennet), aka Quake, who has gone rogue in an attempt to atone for sins from the past. But with the world believing that Daisy is a dangerous outlaw who has taken down banks and bridges, the new Director has no qualms about taking her down for good. Agent May (Ming-Na Wen) is tasked with training specialist strike teams, and Fitz (Iain De Caestecker) and Simmons (Elizabeth Henstridge) have taken a big step forward in their relationship. But with Simmons’ new promotion as Special Advisor to the Director in Science and Technology, Fitz, as well as her former team members, finds it hard to confide in or trust her since she’s now the Director’s confidant.

Robbie Reyes (Gabriel Luna) will roar into the lives of Agent Coulson and the team as a junkyard mechanic who can turn on a dime into the terrifying Ghost Rider. Will Robbie be a friend or foe to  – as well as the world, itself? Meanwhile, Fitz discovers that socially awkward genius and friend Dr. Radcliffe (John Hannah) has started putting the finishing touches on a new, secret invention.