2019 is shaping up to be one of the most crowded years for superhero films to date, which isn’t exactly a bad thing. This year, superhero films like Black Panther and Deadpool 2 and Venom seemed to be pretty spread out as far as release dates go, even with other Marvel Cinematic Universe films released as well, such as Avengers: Infinity War and Ant-Man and the Wasp. Next year, the release dates will be a bit more stacked but if you’ve been lacking that DC fix, then it’s going to be a particularly good year for you.

Next year, Shazam!, Joker and Wonder Woman 1984 arrive in theaters but the DC Extended Universe resurgence will be kicking off as early as this Christmas with James Wan’s Aquaman. The film made huge waves at San Diego Comic-Con after its first trailer debuted, giving fans a look at the incredible world and creatures they can expect from DC’s latest adventure. When the 5-minute sneak peek recently hit the internet, it only got fans more and more excited. To hold over your appetite for more Aquaman before its release this December, check out an awesome behind-the-scenes image from the film below, courtesy of Total Film. 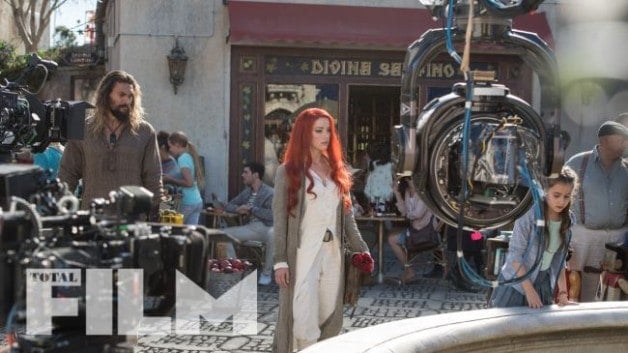 The image may not give fans a look at some fantastic new location or creature, but that’s not such a bad thing considering those kinds of discoveries are sure to look incredible when experienced on the big screen. We’ll be sure to keep you updated on all news regarding Aquaman as more information becomes available. What are your thoughts on the Aquaman footage thus far? Let us know your thoughts in the comments below!