The Green Arrow faces his female psychopathic copycat, Cupid, after the team lures her into an awkward fake-wedding trap. There’s laughter, tears, and lots of different colored arrows, as hearts are broken both literally and figuratively on the latest episode of ‘Arrow’.

The episode opens with a terrified couple bound to chairs, being taunted by the one-and-only Cupid, wearing the best version of her costume we’ve seen from her in the series so far. She kills them with arrows, for they are in love, and that is something she wants to kill. 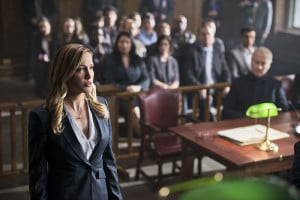 Meanwhile, Laurel Lance is making her case against Damien Darhk in court. It’s good to see him still under the boot of the law, though Laurel’s case isn’t as clear as she had hoped. Looks like we’ll have some Laurel legal drama coming up, too.

Oliver, sporting a gentle tight sweater, and Felicity, walking around more smoothly than ever before, explains her elaborate move-out plans, per the ending of their relationship last episode. Oliver is hurt, but defeated.

In Flashback Land, Oliver is wearing a similar sweater, making for a somewhat confusing flow of events, but the music and mood of the scene clarifies the difference. They’re coursing through the spooky tunnel they uncovered at the end of the last flashback, and their military guide Baron Reiter, who hasn’t exactly been shy about his mystical inclinations, communes with a creepy idol while Oliver and Taiana try to escape. They get away, but Reiter continues to threaten them via walkie-talkie. Yawn! Oh, sorry, I didn’t realize I was so sleepy.

Team Arrow discusses how quiet Hive has been lately, and Laurel suggests Felicity run for mayor, as Felicity lets it slip that she has broken up with Oliver. Oliver admits a naive hope to Diggle that the fact that Felicity wants to remain on the team means there is hope for their relationship.

The Green Arrow is called to the crime scene of the murdered couple, where Detective Lance notes that Green Arrow looks more grim than usual. That’s when he finds a piece of evidence that is the irony of ironies, a coincidence so clever that you just want to tell the writers, “I see what you did there”: the killer is Cupid, a villain whose motus operandi is love and murder, and Oliver just so happens to have just gotten his heart broken. What are the chances?

Diggle testifies against Darhk in court, and it’s interesting to see Team Arrow interact on such a public level. Everyone’s in the house, including Oliver and Thea, as Darhk’s lawyers present irrelevant information to damage Diggle’s credibility with some story about Diggle buying cocaine for Thea. 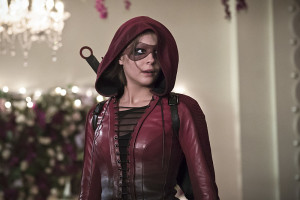 Felicity calls in to report that she’s located Cupid, who’s kidnapped another celebrity couple (see where this is going?), and the Green Arrow and Speedy pair up after her. Cupid’s in a wedding limo, the Queen sibs are on a motorcycle, which Oliver rides into Cupid’s warehouse hideout.

A one-on-one fight ensues, as Cupid spits out strange one-liners like, “I was in love with the Arrow, but you’re not him. Although, I do like the sleeveless.” She might look cool, but she says all of her lines the same exact way. It’s almost like it doesn’t even matter what stupid thing she’s saying, as long as she uses that same specific cadence. The Green Arrow saves the couple, but Cupid gets away.

Felicity and Oliver discuss the legitimacy of Cupid’s quest to kill happy celebrity couples, and Felicity sort of sees Cupid’s point. Thea and Diggle offer some tough love to Oliver, demanding that he tell Felicity that he wants to get back together with her. It’s pretty sad, considering how defeated he has been. At any moment, if Oliver decided that, after all he’s been through, he couldn’t withstand the pressure of a normal relationship, it’d be completely understandable. But Oliver has a resolve unlike many characters in fiction, and his friends and family hold him to that higher expectation. So it’s pretty weird how easily he let Felicity slip away; in last week’s episode, he didn’t even go after her when she walked out on him.

The Green Arrow, Thea, and Diggle investigate Cupid’s lair, and they find evidence that Cupid’s planning to target Oliver and Felicity’s imminent (well, formerly imminent) wedding. Oliver suggests they get married, probably hoping that playing house will easily win Felicity back over. And that’s when a million “Olicity” fans cried out in shame, especially after Marc Guggenheim tweeted that photo of Oliver and Felicity’s wedding a few weeks ago. 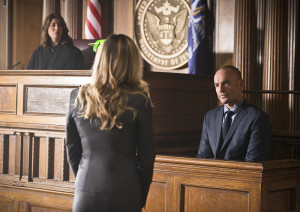 Back in the courtroom, Laurel interviews her own father, which, as much as I support what they’re trying to do, doesn’t seem like a very reliable legal situation. Talk about bias. Anyway, Lance does a convincing job of explaining he worked for Darhk under duress, fearing for Laurel’s life. But… then Lance sort of goes off the rails, talking of “ghosts” and Darhk’s plans to save the city, and it’s all stuff familiar to us, the viewers, but kind of crazy to anyone paying attention in that courtroom. Nevertheless, this is television, and Darhk’s lawyer is speechless against Lance’s evidence-less accusations. 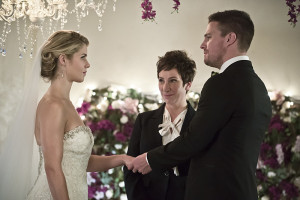 Oliver and Felicity embark on their fake secret wedding ceremony, and I can’t help but wonder on how mean this whole thing is for the woman marrying them. Isn’t luring a serial killer here sort of putting an innocent woman in grave danger? I almost hoped she was an undercover ARGUS agent, able to fend for herself against the oncoming villainous archer. Oh, well. The two exchange vows, their real vows, and they seem to get lost in the moment. Is it real? Or is this just a really well-acted scene? Oliver Queen does have plenty of acting experience after a long history with a secret identity. Whatever it was, Cupid ruins it by soliloquizing and shooting Oliver in the chest with an arrow. Oh, he was wearing Kevlar.

Cupid explains why she’s so interested in their relationship, especially the miracle of Felicity’s healed paralysis. She’s just a fangirl! Maybe she represents Olicity haters out there? Felicity takes the talk-her-out-of-it approach, explaining how ready she is to die for love, and, again, it’s hard to tell truth from fiction here, but it’s hard to imagine that Felicity would so callously play with Oliver’s heart like that. Diggle and Thea end the moment with a brutal assault on Cupid, and she doesn’t get a chance to redeem herself after Oliver shoots her with a tranquilizer dart. 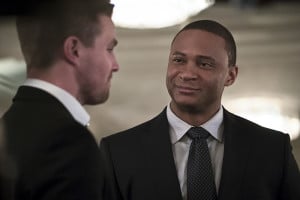 The incident turns out to be a highly publicized affair, which makes things even more interesting for the famous couple. Oliver suggests meeting up and talking again, and Felicity isn’t exactly for it, nor is she exactly opposed. Things are looking… okay for Oliver and Felicity, but nothing is set in stone. Diggle sure seems happy about the way things played out, telling Oliver that she just needs more time.

In the courtroom, the judge reiterates the fact that there is no evidence against Darhk, but Lance, somehow, convinces her, and Darhk is held without bail or the possibility of release. Crazy as it seems, Laurel and Team Arrow have won. The next step, Lance points out, is getting a conviction against him. And, unfortunately, as a result of Lance’s testimony, Lance is suspended from the police force. I personally hope this is the new status quo; it’d be interesting to see Lance step away from law and order and into the shadowy world of vigilante-ism.

Oliver explains to Felicity that he meant everything he said, but she admits that while she does love him, what she said didn’t apply to their relationship. Oliver desperately begs, she can’t get past the scary man on the island who gets by on dangerous, often emotionally imperative survival-based instincts. And, even worse, Felicity quits Team Arrow. Yes, even after that snazzy promo pic was released of Overwatch holding a T-Sphere. Something tells me she won’t be gone for long. 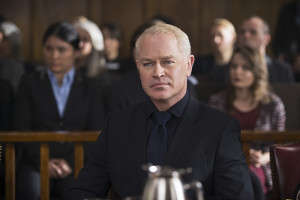 Darhk is led to his cell, brooding but calm, and immediately reveals a ring that he’d be storing in his mouth. He smiles, for this is very likely the source of all of his power.

While it’s refreshing, in a way, to see ‘Arrow’ return to its villain-of-the-week formula, it’s also a little (no pun intended) disheartening. The plot was plodding along just fine, and this episode should have been a strong opener into Season 4’s act three. And, worst of all, Malcolm Merlyn didn’t show up, even after my feature suggesting the writers were planting the seeds toward his becoming Season 5’s primary villain.

Either way, Oliver and Felicity have some closure, and even though I was a fan of their relationship (rarely do we have stable couples as protagonists), at least we don’t have to see them break up again. Overall, I fear the show is losing steam. Four seasons is a lot of story, and it’s unclear if the show runners know where they’re going. It’s almost like things have just been drifting along since the epic second season. I do enjoy these episodes on an individual level, but I only hope they can tie in more thoroughly to tell the rich story I know the writers are capable of, and that the fans more than deserve.

(Also, can I just say, is Cupid not ‘Arrow”s version of Trajectory? I mean, even down to the maroon.)