Last week, Season 4 came to a screeching halt as Team Arrow faced the Bug-Eyed Bandit in a pun-filled episode with very little narrative and character progression. Tonight, we got the first of what producers are saying is the adrenaline-fueled final act of the season. Tonight is also the night we find out just which random series regular dies per those recurring funeral flash-forward scenes. Does the season make up for some not-exactly-fan-friendly choices? Do we finally get back into the Damien Darhk conflict? Is the major character death earned? The answer is one big “hmmm…” as we look closely at what happened in this week’s ‘Arrow’.

We open in the Diggle household, with Andy (who has been working with Malcolm Merlyn and H.I.V.E.) sneaking around with a gun. Now, I originally suspected John Diggle would be the one in the grave, but it seems like the show will be faking us out with these teases all episode. Andy actually asks John for advice, and comes clean about Malcolm reaching out to him. Maybe he’s not the secret criminal mastermind after all.

Oliver reveals to Team Arrow that he’s seen the idol they’ve been holding away from Damien. He heads over to Ruve Adams’ campaign event, where he learns that a good chunk of the electorate has written in his name, despite his dropping out of the elections. Adams then offers Laurel the opportunity to work as her District Attorney, thus pulling her away from the Damien Darhk trial. Wow. Things seem to really be looking up for her! 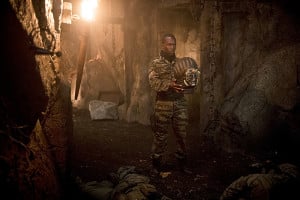 Back in the flashback tunnel, Taiana talks about a photo of her brother, and Oliver reminds her that sentimentality won’t help her survive. Sort of a pointless moment, but it does remind us of how callous (?) Oliver used to be. I don’t know — I’m still not convinced his character has changed so much. He still has tantrums, like when he yelled at Curtis last episode, and he still makes very extreme choices; the only difference is that he doesn’t kill anymore. Oliver and Taiana escape, and Oliver shares a wrinkled photo of Laurel with Taiana. They make a deal to tell each other’s loved ones about their time together. Meanwhile, Baron Reiter kills two soldiers to activate the idol, and the flashback sequence ends ominously. 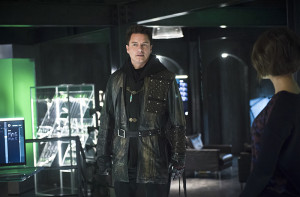 Pictured: John Barrowman as Malcolm Merlyn, before one of two fights with Thea this episode.

Malcolm Merlyn and some assassins bust into the Bunker and take on Thea and Laurel, in hopes of stealing the idol. Malcolm knocks out Thea… is she dead? Will she be in… the grave? No, rest easy, ‘Arrow’ fans; Laurel helps her up just in time to find out the idol was successfully stolen. Nice!

Meanwhile, the Green Arrow and Diggle ambush some soldiers, who are presumably on their way to free Damien Darhk. Andy Diggle reveals himself, and they all discuss how it was too easy to stop them. And that’s because Malcolm needed to steal the idol, which he did, and, well, yeah. But at least that’s when they figure out why Malcolm’s nickname is “The Magician”.

Laurel and Detective Lance meet up at a Chinese restaurant, and Lance reminds her that taking the District Attorney position would cost her the ability to be the Black Canary. And, surprisingly, that’s why he’s against it. He likes that she’s the Black Canary. Now that is a character who’s grown.

Team Arrow follows Andy’s lead into an attack on Merlyn, and the team gets separate just long enough for Andy to get shot by a booby-trapped arrow. Andy encourages them to leave him and head over to Iron Heights to stop Darhk; if he gets the idol, “no prison would stop him”, and all that.

In Iron Heights, Merlyn reveals the idol to Darhk, who notices a missing stone and assumes Green Arrow and the gang hid it somewhere else, and, as Diggle reveals to Andy, it’s true. Green Arrow pulls Diggle aside to warn him against telling Andy to much, telling him something a lot of these characters seem to have forgotten: “Control is only as strong as the secret.” It’s actually kind of cool to see Oliver reverting back to his more extreme former self; if this is intentional character progression, then it’s awesome. If not, then it’s just lazy writing.

Laurel visits Darhk in prison, and they have a totally illegal conversation about the case. Luckily, she shuts down his big words and subtle threats and tells him, rightly so, “I’ll see you in court.”

The Green Arrow catches Andy snooping around the Diggle house, and he reveals his suspicion that Andy has been working for Merlyn and Darhk the entire time, and that he thinks he’s looking for the idol’s missing stone. Oliver forcefully pushes Andy against the wall, demanding information, and just when he threatens to torture the guy, big brother John walks in, pulls a gun out, and threatens to shoot him where the Kevlar don’t shine. Oliver lets go of Li’l Diggle, and promptly GTFO’s.

Oliver and Diggle argue about the way Oliver treated Andy. Diggle warns him not to judge Andy, and that Andy was just looking for surveillance, while Oliver makes the more reasonable argument that Andy was looking for the missing stone. Diggle denies it, and makes it clearer than ever than Andy is off limits.

Then it’s Laurel’s turn to exchange words with Oliver. He tells her to go for the District Attorney job, and to forget the Black Canary; the team’s falling apart anyway, he says. Diggle can’t seem to reconcile with Oliver’s approach, Thea is consumed with rage for Malcolm, and Felicity is gone for good. And he’s right. Wait, so does this mean Season 5 is just gonna be Oliver screaming at Curtis for an hour every week? I guess I’d take that over the Bug-Eyed Bandit. 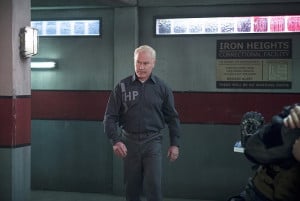 With the help of Murmur (who was such a cool villain in Geoff Johns’ 1990s The Flash run, and I’m so glad they’re using him), Damien carries out an attack from the prison. Laurel and Oliver agree to head out to stop it, suiting up “one last time”. You know, I’m starting to get used to these Laurel/Oliver interactions. I think they should be the ones pairing up; forget Felicity.

Detective Lance shows up to Iron Heights, too, causing an obnoxious distraction for the team to break in. Not the brightest idea, since he’s the one out of a mask, and could seriously lose his job. Oh, well. It worked. Thea encounters Malcolm, and they face off in a rematch. You know, I’ve never bought into Thea’s fighting skills; how long did she even train? And is that enough time for her to have been remotely powerful enough to face off for any reasonable amount of time against Merlyn? Okay, okay, I’ll stop. It’s ‘Arrow’. He wins, and, before he leaves her, tells her she will never be able to beat him until she cures her blood lust.

And Damien Darhk has a gun held up to Andy, Diggle, and Laurel. Diggle puts down the gun to free Andy, who is revealed to have taken the stone all along. Oliver was right! Diggle was wrong. Diggle is dumb. Thea shows up, and, with perfect timing, puts two arrows in Darhk. He still manages to use a sacrificed soldier in order to activate the idol.

Just when he has them all in a “check mate” moment, he reveals that he’s discovered the identities of all of Team Arrow. He tells Laurel that he told Detective Lance he’d kill her if he betrayed her. And, yeah, he definitely betrayed him, so he does exactly that, and pierces Laurel with an arrow. 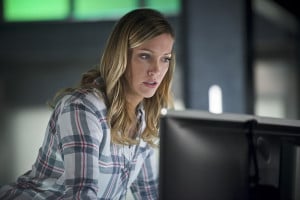 Pictured: Katie Cassidy as Laurel Lance, playing on the computer.

Green Arrow takes her to a hospital, where they immediately begin surgery. Detective Lance learns, back at the station, that Black Canary was hurt “bad”, and he immediately regrets his whole wacky diversion, because now he can’t leave the station to see her. While Laurel is in surgery, Felicity shows up in a weird studded khaki jacket (not relevant, sorry).

Laurel miraculously wakes up from surgery, and wants to see everybody, and they head into her room to see her. She explains that while she intended this to be her last night as Black Canary, it’s actually the only thing that keeps her alive. Everyone but Oliver leaves, and she reveals, in a way, that she never stopped loving him, and that she held onto the picture he’d kept on Lian Yu. Suddenly, Laurel starts seizing, and they lose her. Not the death I’d expected at all. Detective Lance shows up, and one look from Oliver tells him what happened. He collapses from sheer inability to function without his daughter. 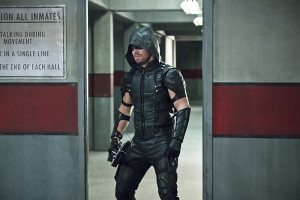 Pictured: Stephen Amell as Green Arrow, who is probably going to be crankier than usual from now on.

It didn’t occur to me until I was listening to the excellent Green Justice Podcast just how much fans have been hating this season. I certainly thought it was a hodgepodge of not-totally-related episodes, but I never felt super negative about it, and certainly not toward Felicity, who seems to be the focal point of fans’ anger. The consensus seems to be that the show bought into her role as a fan favorite, and in turn sacrificed a lot of what made the show great in order to shine more of the spotlight on her. On top of that, there’s even a small movement of fans threatening to stop watching the show because of the Black Canary’s death. I do think there is some merit to the idea that potential for Laurel’s character was cast aside in favor of doing more with Felicity, so it makes me wonder what other tone-deaf decisions the show runners have made in what they felt was service to the fans. This could also be why the flashbacks are increasingly disjointed from the show, unlike the spot-on intertwining of the first and second seasons.

Despite these common gripes, this episode at least gave a spark of hope for the rest of season. ‘Arrow’ could still finish strong, with another great adversary to add to the books, and it also reminded us just how formidable and untrustworthy Malcolm Merlyn really is. As for the more mystical aspects of the show, that this season seems to be focusing on? Eh. I don’t think it’s working so well at this point, and I’d like to see a return to realism, or at least more science-based superheroics in the next season. What did you think of this episode? Is the season finally heading in the right direction, or has it been heading there all along? Sound off in the comments below!