Disney has officially kicked off its Oscars campaign for Avengers: Endgame, but fans will be surprised to learn that Robert Downey Jr. hasn’t been included for Best Actor. Since Avengers: Endgame is the culmination of over ten years of storytelling and the creation of a cinematic universe, it isn’t surprising that Disney is looking for recognition from the Academy. But it’s interesting that the studio is specifically aiming for the awards given to talent behind the camera, rather than in front of it.

While that’s not to belittle the technical talent that went into creating Avengers: Endgame, after Robert Downey Jr.’s emotional performance throughout the film many fans thought he might have a chance for Best Actor. Obviously it’s worth noting that none of the actors in the Marvel Cinematic Universe have been listed for their roles in Avengers: Endgame, but since Robert Downey Jr.’s Iron Man kicked off the critically acclaimed series of films, it’s surprising that Disney isn’t after some recognition for his efforts. Take a look below for the entire list of awards Disney is looking to win. 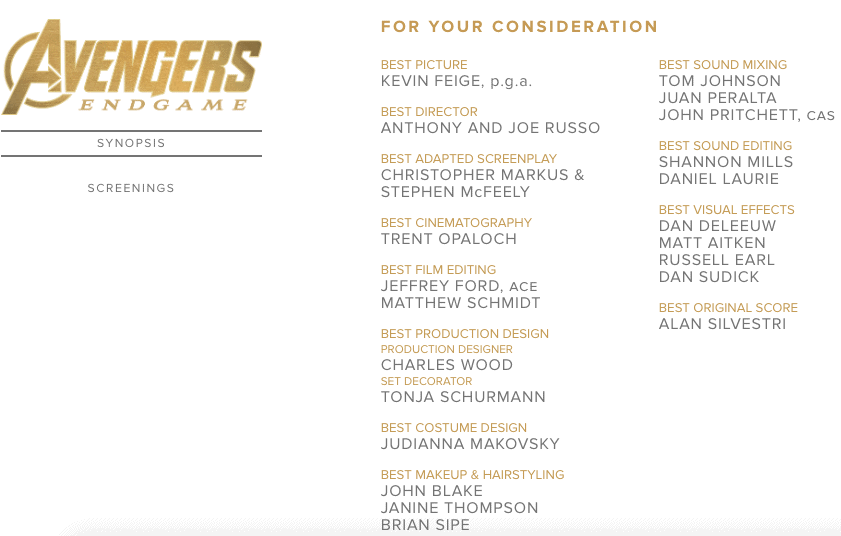 Do you think Robert Downey Jr.’s performance should be rewarded with a Best Actor nomination? Tell us in the comments!

Robert Downey Jr. was last seen as Iron Man in Avengers: Endgame. Here’s the official synopsis for the movie: