One of the most shocking moments of Avengers: Infinity War holds a very interesting connection to a pivotal scene in 2015’s Avengers: Age of Ultron.

Early on in Avengers: Age of Ultron, audiences are introduced to Scarlet Witch (Elizabeth Olsen) for the first time since her debut in the post-credits scene in Captain America: Winter Soldier. During this time, she is able to warp the minds of the Avengers, including Iron Man, aka Tony Stark (Robert Downey Jr.). The vision that Stark witnesses is pivotal to the story of Age of Ultron and it features him standing over Earth’s Mightiest Heroes, who are all dead, aside from Captain America (Chris Evans) who is able to let out a few emotional words before dying.

Something that’s very interesting about this moment is that all of the characters that Tony sees were all survivors of the infamous snap at the end of Avengers: Infinity War. The finale of the latest Marvel team-up had Thanos (Josh Brolin) enacting his plan of decimating have of all life in the universe. With the snap, Marvel Cinematic Universe fans had to say goodbye to heroes such as Spider-Man (Tom Holland), Black Panther (Chadwick Boseman), Falcon (Anthony Mackie), Winter Soldier/White Wolf (Sebastion Stan), Scarlet Witch, Peter Quill (Chris Pratt), Drax (Dave Bautista), Doctor Strange (Benedict Cumberbatch), Groot (Vin Diesel), Nick Fury (Samuel L. Jackson), and Maria Hill (Cobie Smulders).

Now, take a look at an image from Stark’s Age of Ultron vision below. 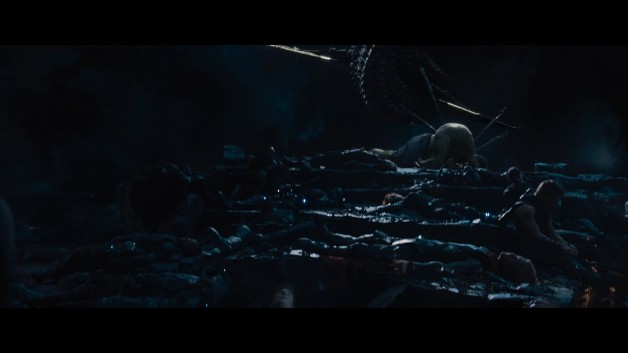 Notice something interesting? Every hero pictured there is a survivor of Thanos’ snap. This is one of those interesting franchise tidbits of information that could be done on purpose, or simply because they didn’t want to premiere Spider-Man and Black Panther as dead bodies a year before they made their big screen debut in Captain America: Civil War. On the other hand, it could give fans a look at what to expect from the finale of next year’s Avengers 4.

Tom Hiddleston Reveals His Favorite Improv Moment In The MCU

Whatever the reason is, fans probably won’t know of its importance until the highly-anticipated sequel arrives in May. It sure does open up some fascinating conversations though. We’ll be sure to keep you updated on all news regarding Avengers 4 and the MCU as more information becomes available. What are your thoughts on the image? What do you think it means for the future of the franchise? Let us know your thoughts in the comments below!