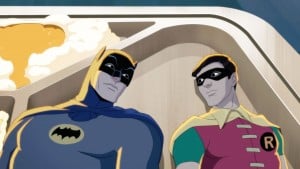 There have been more-than-a-few chances to see Batman on the big screen this year. If you’re looking for another chance, however, it’s coming to a theater near you soon. But there’s a catch. If you want to see Batman: Return of the Caped Crusaders on the big screen, you’ve got one single day. Much like they did with Batman: The Killing Joke earlier this year, Fathom Events will release the new animated superhero film in select theaters across the country on October 10th, and on that day only.

The Warner Bros. Home Entertainment release will screen three times next month, with 2 PM, 7:30 PM and 10 PM screenings available to those who want to trek to the theater to see the animated action-adventure nod to the campy ’60s Batman series. Reuniting Adam West, Burt Ward and Julie Newmar to their classic caped characters, it’s a tongue-in-cheek callback to the lighter, goofier days of Batman. Those who found Batman v Superman: Dawn of Justice a little too oppressive might enjoy this new take.

In addition to the film, the screening will also provide an exclusive pre-screening introduction and a post-screening preview of “Those Dastardly Desperados,” a featurette exploring how the Bat-villains became American pop culture icons — as seen most recently in Suicide Squad, for instance. That featurette will also be included in the home video release, which becomes available on Digital HD on October 11th, the day after the limited theatrical release, and on Blu-Ray on November 1st.