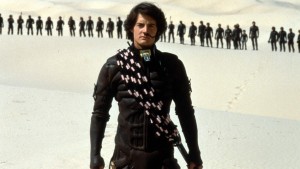 If you don’t recognize the name Denis Villeneuve, you’ll want to change that. The filmmaker behind Incendies, Prisoners, Enemy, Sicario, the upcoming Arrival and the currently-filming Blade Runner 2 is a rising talent, to say the least. He’s settling his sights for greatness, and he also wants to stay cemented in the sci-fi genre. His sights are set on the Big Kauna: Dune. That is, if he can get himself in the director’s chair.

In an interview with Variety, Villeneuve revealed his desires to tackle Frank Herbert’s classic opus. Talking about how sci-fi filmmaking was a dream since his early days, with inspiration from 2001: A Space Odyssey, Close Encounters of the Third Kind and, of course, Blade Runner — the usual suspects — the director revealed his ultimate dream project within the futuristic genre.

I’m always looking for sci-fi material, and it’s difficult to find original and strong material that’s not just about weaponry. A longstanding dream of mine is to adapt Dune, but it’s a long process to get the rights, and I don’t think I will succeed.

Granted, that statement is a long way from confirming he’ll make it. But it continues Hollywood’s longstanding hope to do justice to the acclaimed novel. There has only been one successful attempt to realize Dune to cinema, and that word is used rather loosely in certain circles. David Lynch’s 1984 film remains the only imagining brought to the big screen. There’s also SyFy channel mini-series as well.

Directors like Peter Berg (Lone Survivor) and Pierre Morel (Taken) also tried their hand, but neither got far. Of course, the most notorious attempt comes from Alejandro Jodorwsky, which is explored in the 2013 documentary Jodorwsky’s Dune. If you haven’t seen it, make a point to check it out.

Dune earns comparisons to Star Wars in its sci-fi vision and Game of Thrones in its density. Suffice to say, bringing it to the big screen would be quite the challenge. I suppose Blade Runner 2 is the real test of Villeneuve’s potential, although Arrival is currently getting some excellent reviews out of the festival circuit. It’d be great to have another great director in the Hollywood system, especially one that could make something like Dune fully realized on the big screen.

If that doesn’t come to light, however, Villeneuve has options. He has two other sci-fi projects in the very early stages, though it’s “too early to talk about them.” We’ll just have to wait to see what he does. But in the meantime, we have Arrival and Blade Runner 2 to look forward to. That’s good enough for now.