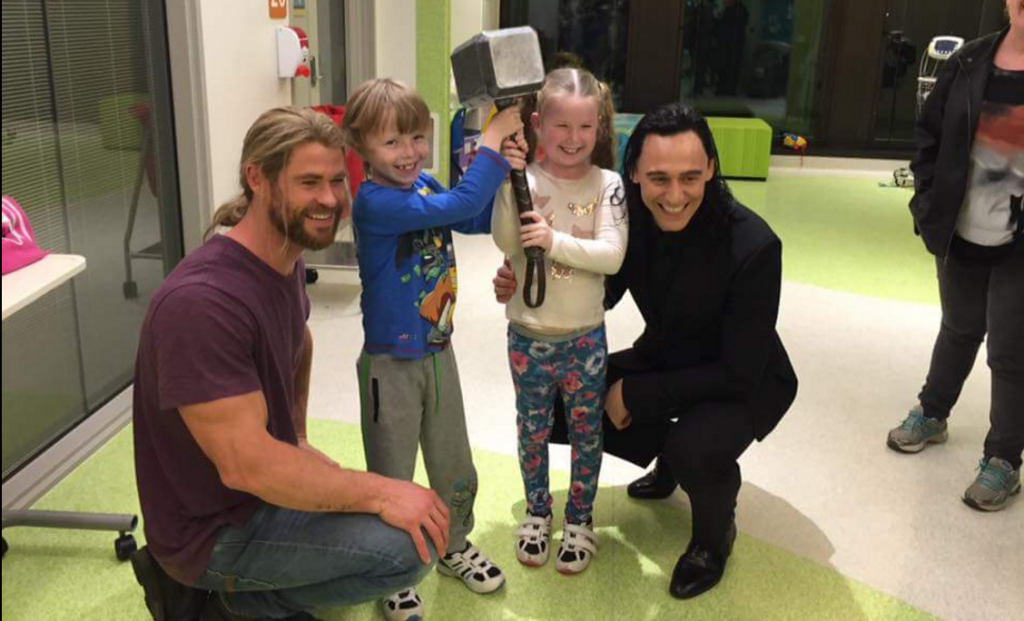 Thor: Ragnarok is currently in production, and seeing new photos from the set is always exciting. Recently, principal photography for the newest Marvel Cinematic Universe entry commenced in Brisbane, Australia – where it indicated that the film will indeed have scenes that are Earth-based (New York City specifically) despite prominently taking place in the cosmos of the MCU.

Chris Hemsworth (Thor), Tom Hiddleston (Loki), and Anthony Hopkins (Odin) were all spotted on the Brisbane set. Hemsworth has taken to his Instagram account some exciting images from Brisbane including one of him and Hiddleston sitting together by a newsstand “selling papers.”

But one of the nicest elements of this shoot in Brisbane was seeing both actors take the opportunity to meet and greet with fans. Both Hemsworth and Hiddleston met up with children at Brisbane’s Lady Silento Hospital, even letting two children lift the hammer of Mjolnir.

Thank u @chrishemsworth & Tom for stopping by and putting massive smiles on my lil bro and sisters face #Thor #Loki pic.twitter.com/cD4jdI6L3g

Hemsworth also shared two photos of him socializing with the many excited fans near the set. One of the photos is a selfie of the actor along with a large group of fans, all excitedly waving towards the camera. In that post, Hemsworth thanked Brisbane for letting the cast and crew film there.

The second image is the one that will immediately melt your heart. Hemsworth is seen smiling towards a young boy wearing a Captain America costume and wielding his mighty shield. The actor jokes about how Chris Evans decided not to commit to the physical training he needed for Avengers: Infinity War, but then continues on by saying that “he’s still awesome.”

It’s always nice to see the actors and actresses of these comic book films take the time to give their gratitude to the fans in person. You can tell that they are eternally grateful for the love and support fans worldwide have given them for bringing all these colorful characters to life on the big screen. How can that not put a smile on your face?