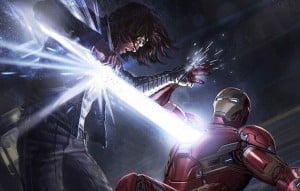 With the theatrical and home video release of Captain America: Civil War behind us, fans are eagerly awaiting the release of Marvel Studios’ next film Doctor Strange. That hasn’t stopped Marvel Studios Visual Development Supervisor and Lead Concept Artist Andy Park from keeping interesting in Civil War alive by sharing pieces of concept art for the film in recent weeks.

Now the most recent artwork he has shared gives fans a look at how the creative team behind Civil War envisioned the climatic between Iron Man and the Winter Soldier in the films early stages of development. The image depicts the moment where Tony Stark uses the iron suits arc reactor to deliver a powerful blow to Bucky Barnes after learning that as The Winter Solidider, Barnes was responsible to the death of Stark’s parents, Howard and Maria.

Park has also shared a short video featuring a pan across the artwork.