A tie-in comic for The CW’s Crisis on Infinite Earths may offer fans their first look at HBO’s Max’s Green Lantern.

Last year, HBO Max officially announced the Greg Berlanti is developing a Green Lantern series for the streaming service. While fans have not been given many details on the Green Lantern show, a tie-in comic for The CW’s Crisis On Infinite Earths crossover may have given fans their first glimpse at the HBO Max series.

In the Crisis on Infinite Earths Giant #2 comic, Felicity Smoak, The Ray, and Nyssa Al Ghul travel to Earth-12 and venture to the planet Oa, where they meet the Guardians of the Universe. While the Guardians initially refuse to grant Felicity access to the Book of Oa, the villainous Anti-Monitor had followed her to the planet with an army of shadow demons.

The invasion prompts every Green Lantern on Oa to arrive on the scene to defends the Guardians, giving the Guardian Ganthet a chance to being Felicity to the archive where the Book of Oa was being kept. During this battle, Thal Sinestro,  Kilowog, and Tomar-Re make wagers on how many shadow demons they can kill, potentially offering fans their first glimpse at the versions of the characters who will appear on the HBO Max series.

Check out a panel of from the Crisis on Infinite Earths comic featuring the characters. 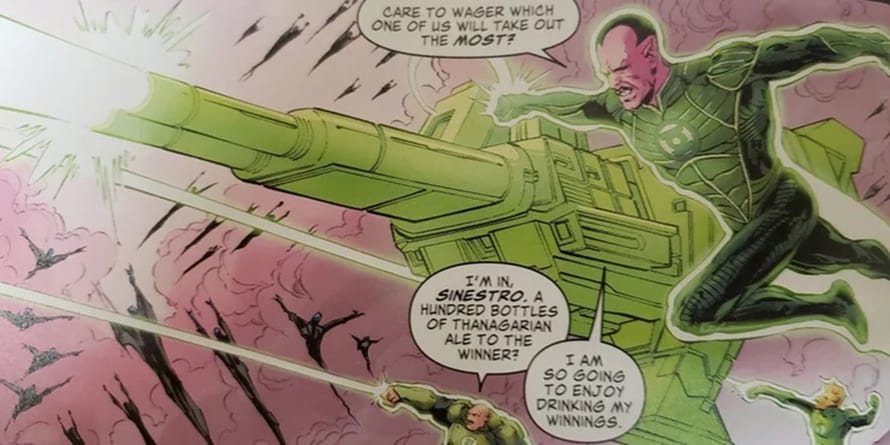 HBO Max’s Green Lantern series will span several decades and focus on the origins of two Emerald Knights, with classic comic book villain Sinestro appearing as well. In addition, HBO Max is developing a Strange Adventures DC anthology series and a DC Super Hero High show from Elizabeth Banks. News of the Green Lantern series arrived shortly after reports of HBO Max planning to produce DC projects with budgets on par with those of feature films.

Stay tuned to Heroic Hollywood for the latest news on HBO’s Max’s Green Lantern series and the Arrowverse in a post Crisis on Infinite Earths world!