FOX has officially revealed our first look at David Mazouz’s Batman in a new poster for Gotham teasing the final two episodes of the series.

With FOX’s Batman prequel series set to conclude this season, the series will finally see David Mazouz complete his journey as he dons the Cape and Cowl and officially becomes Batman while Cameron Monaghan’s Jeremiah becomes The Joker proper.

While David Mazouz’s Batman costume has surfaced online already, the Network has finally given us our first look at the series’ take on the Batsuit, which features a design that appears to be inspired by Christian Bale’s Batman in Christopher Nolan’s The Dark Knight Trilogy. Check it out below! 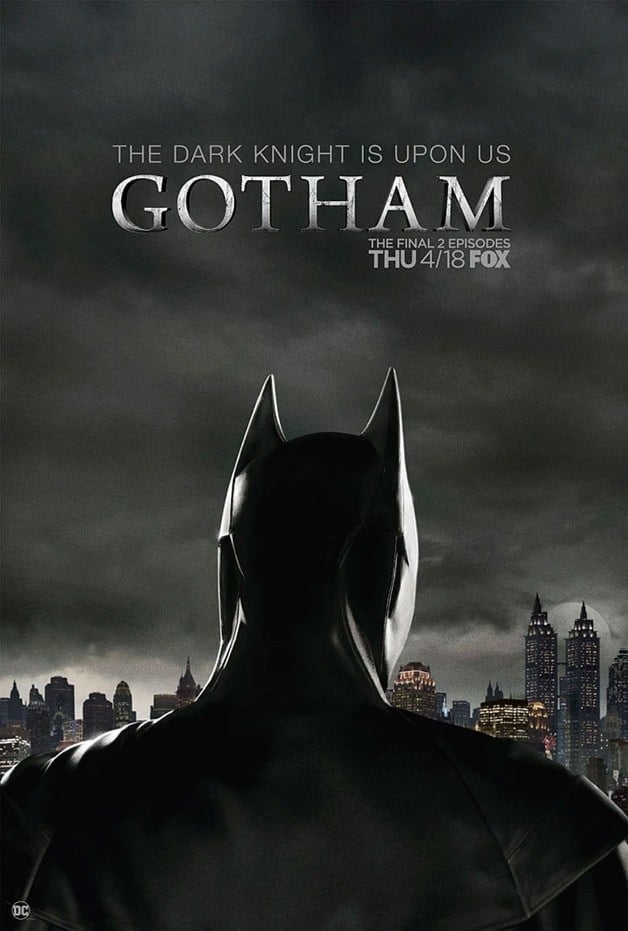 David Mazouz’s Batman is not the only character to have been revealed for the finale already as both an older Catwoman played by Lili Simmons, as well as Cameron Monaghan’s final look for the Joker have surfaced online. Cameron Monaghan’s final Joker looks to be inspired by the Earth-2 Joker which is an old version of Clown Prince of Crime. After he fought Batman for years, he allegedly killed the Caped Crusader. But even with his age and disabilities, he’s still fighting against Batman supporters like Robin or Huntress, which is Batman’s daughter Helena Wayne in this universe. Although it’s more likely we’ll see an early version of the Joker in Gotham, who’s just starting his feud with Batman, but their looks are very similar.

So what do you think? Do you like the costume design for David Mazouz’s Batman in Gotham? Let us know in the comments below.

Gotham continues this week with the episode titled “They Did What?” and you can read the official synopsis below:

As Bane (guest star Shane West) enacts his final plan for Gotham’s destruction, Gordon rallies his former enemies to save the city. Meanwhile, Nyssa al Ghul (guest star Jaime Murray) kidnaps Barbara’s newborn daughter with ambitions to raise her as her own. Then, Bruce’s decision to leave Gotham points him to his destiny, while devastating Selina in the all-new “They Did What?” episode of GOTHAM airing Thursday, April 18 (8:00-9:00 PM ET/PT) on FOX. (TV-14 L, V)