Warner Bros. Animation has revealed the release date for Reign of the Supermen along with the cover art and home release details.

Earlier this week, the first trailer for Reign of the Supermen was released and now the studio has announced more details regarding its home release. The film will be available digitally January 15, 2019, and for 4K Ultra HD and Blu-ray on January 29, 2019. You can check out the box art and the rest of the details below: 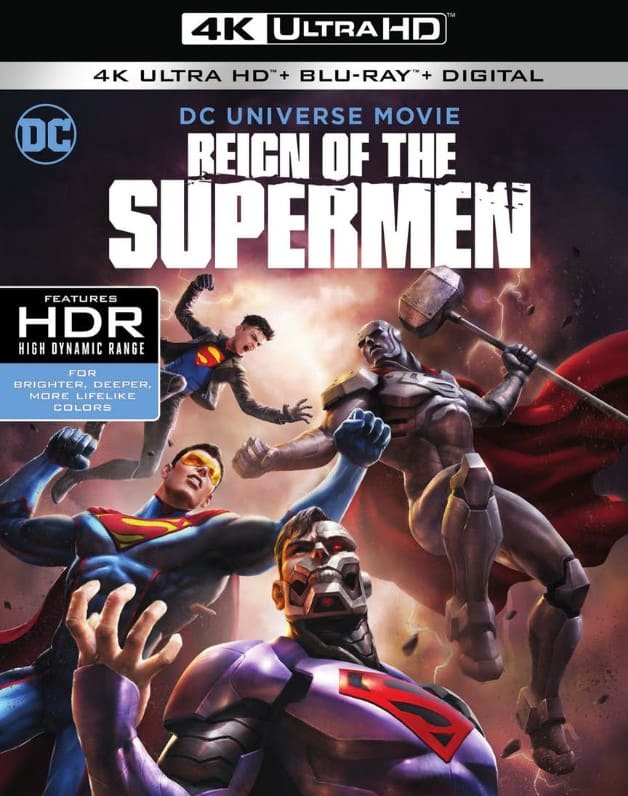 Are you excited for Reign of the Supermen? Comment below!

Based on the 1993 comic book storyline of the same name, Reign of the Supermen is set after Clark Kent’s fatal showdown with Doomsday as Lois Lane finds herself looking to see if one of these heroes is actually a reborn version of the man she loves while the people of Earth will have to see which one of these new heroes will be able to fill the void left by the Last Son of Krypton. Here is the synopsis:

Reign of the Supermen finds Earth’s citizens – and the Man of Steel’s heroic contemporaries – dealing with a world without Superman. But the aftermath of Superman’s death, and the subsequent disappearance of his body, leads to a new mystery – is Superman still alive? The question is further complicated when four new super-powered individuals – Steel, Cyborg Superman, Superboy and the Eradicator – emerge to proclaim themselves as the ultimate hero. In the end, only one will be able to proclaim himself the world’s true Superman.

Stay tuned to Heroic Hollywood for all the latest news on DC’s upcoming animated projects!