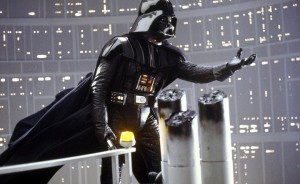 Darth Vader is in Rogue One: A Star Wars Story. That’s not a secret. And while early reports suggested Vader’s appearance will be a cameo rather than an active role in the film, details have been marginal — if practically unknown — since then. But with the ongoing Star Wars Celebration happening this weekend, more information has come to light about the upcoming science fantasy film, including a peak at Vader’s once-mysterious pop-up. The footage itself hasn’t been released, at least not publicly, but new reports have given some light to the dark one’s time in the upcoming blockbuster.

ScreenRant notes Vader doesn’t come until late in the new trailer, with the villain concluding the reel. It’s more a silhouette, however, and he’s not shown in full form. Here’s what they wrote in their report:

[H]is silhouette and vague details of his costume are seen in a reflection as the camera pans upward over a shiny floor, with something bright red behind Vader as we hear him breathe. It’s not a surprise, but as one of the most iconic film characters of all-time, it was no less exciting.

He’s got such a gravitational pull, the second he shows up you just get sucked into Darth Vader. So it was a process to try and figure out how to pepper that in in a way that felt right. When I read the first document, which is ‘this is what we’re thinking of doing’ I was like ‘Oh my god, they’re going to do that film? Geeze.’ And at the time I thought they must have sent it to hundred other people and I accidentally got it by mistake. Then I realized they were going to do it, and I was like ‘I could never live with myself to be two years from then and it’s coming out and this is happening and there’s some guy here going ‘yeah, so we filmed in 360′ and I’d be going ‘God damn I could have been doing that!’ So you have to do it…and I’ve forgotten the question.

Edwards also shared some details about working on the blockbuster, his influences behind it and the approach brought by himself and Lucasfilm, which can be read below.

I got pulled into making the film through my love of the original films, but then what was a clear conversation that happened early on at Lucasfilm is that we’re doing new things here, this is not a karaoke number or just pure winks and fan service. That’s not going to make a good film. This has got to be characters that you care about and there’s an opportunity to create new people and events that pull you in, so hopefully the goal is that you come to the film for all the reasons that we love Star Wars and you get sucked in and start to care about the new people and when you’re in the midst of all that and that’s going on, familiar things start to pass you by, you start to remember ‘Oh yeah, oh yeah’ but the film should exist on it’s own terms.

If all these films are ever just ‘And here’s that character you love, Yay! Here’s that other character you love, Yay!’ all the time, that’s all they’re doing then they’re not really doing what George did – he tried to find stories that were about something, that were saying something, that you keep in your pocket forty years later, that stay in your head and are still affecting you.

Rogue One: A Star Wars Story hits theaters on December 16, very close to when Star Wars: The Force Awakens was released last year. Hopefully the spin-off film can avoid some early controversy and become another shining addition to the never-ending series.