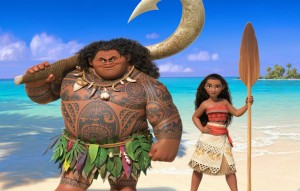 The warm air of summer will only last so long. Thankfully, though, Disney is planning ahead. The original, CG-animated South Pacific fable Moana will crash land its way into theaters everywhere on November 23, and in order to wet our thirsty appetites, the Mouse House has given moviegoers a splash of what’s set to hit shore.

The newest film from Disney legends Ron Clements and John Musker, the guys behind Aladdin, The Little Mermaid and, most recently, The Princess and the Frog, to name a handful, this first trailer gives us a brief, if lively, introduction to our newest characters, the demigod Maui (Dwayne “The Rock” Johnson) and our titular hero (newcomer Auli’i Cravalho) before they set sail on their island adventure. And man, does this one look good.

In addition to featuring the voice talents listed above (oh yeah, did I mention The Rock sings?!), Moana comes co-written by Taika Waititi (What We Do in the Shadows, the upcoming Thor: Ragnarok) and featuring original music by none other than Lin-Manuel Miranda. You know, the guy who created Hamilton and will probably win a Tony tonight. And this won’t be his first time working with Disney. In addition to helping J.J. Abrams create some new music for Star Wars: The Force Awakens, he’s set to star in the new Mary Poppins alongside Emily Blunt. Disney knows how to keep a good thing going.

As for the film itself, it’s evident it comes from the directors behind Hercules, as it carries a similar spunkiness and flourish. And with the smooth animation we’ve come to expect from the people behind Zootopia and Frozen, it would be a disservice to yourself to miss out on this one. Make sure you please the Gods (and demigods) by checking out this first look below. You won’t be disappointed.