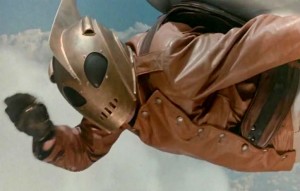 The Rocketeer wasn’t a hit when it was released in 1991. Director Joe Johnston’s sophomore film and his long-time passion project, before he went on to make other studio ventures like Jumanji, Jurassic Park III and Captain America: The First Avenger, was met with mixed reviews and it barely made back its budget. It was considered a disappointment for Disney at the time, but over the years, the film has rightfully earned a cult following. In the age of on-screen superheroes we live in today, this period piece was perhaps a little ahead of its time. But for that very reason, the studio is hoping to give it a second shot. Disney will reboot the 25-year-old unforgotten blockbuster, it was announced this morning. But here’s where things get interesting.

It’s still in the early stages, but it’ll be called The Rocketeers and it will be penned by Max Winkler, son of Henry Winkler and the writer/director behind the under-seen Ceremony, and Matt Spicer. It’s considered more a sequel-reboot than a straight remake, which might earn comparisons to TRON: Legacy in its approach. Hopefully it works out better than that one did, both financially and in terms of quality. But it very well could, because it has a very compelling and a very promising twist: it will be highlighted by a black female character.

Produced by Brigham Taylor (this year’s The Jungle Book), LA Clipper’s Blake Griffin (!) and Carolina Panthers’ Ryan Kalil (!!), it will take the Dave Stevens’ source material, an indie comic made as a loving homage to the serials of the ’30s and ’40s similar to Star Wars and Raiders of the Lost Ark, and provide a fresh spin on the material. It will still take place in the period setting, but it will be set six years after the legacy of the first Rocketeer and after the second has vanished while fighting the Nazis. This is where our young, African-American female pilot will take the mantle of the Rocketeer, who will attempt to stop a corrupt rocket scientist from stealing jetpack technology during the turning point of the Cold War.

This is certainly a surprising and completely unexpected turn for the new franchise, but one that offers a lot of promise and exciting possibilities. I’ll look forward to seeing what’s produced by Winkler, Spicer and their team. Hopefully, it’ll live up to the original, while also hopefully making something a little more financially profitable to boot.