The new year has come, and with that comes the boatload of films and television series we can expect to see in our theaters and on our TV screens respectively. One film that many are excited for is Dumbo, Disney’s live-action re-imagining of its classic 1941 animated film.

Disney Prepares Audiences To Soar With A New ‘Dumbo’ Trailer

A new article from USA Today features a new image from the film, showing Colin Farrell’s war veteran Holt Ferrier and his kids (Finley Hobbins and Nico Parker) comforting the titular big-eared baby pachyderm. Check it out below: 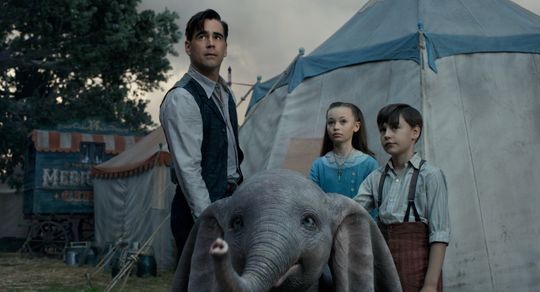 This image teases the familial bond Dumbo develops with the Ferriers, which is sure to generate more than enough heartwarming moments throughout the film. We’ll see how well it can pull at our heartstrings when it releases in a few months.

Are you planning to see Dumbo? Leave your thoughts in the comments!

Here is a plot synopsis for Dumbo:

Circus owner Max Medici (Danny DeVito) enlists former star Holt Farrier (Colin Farrell) and his children Milly (Nico Parker) and Joe (Finley Hobbins) to care for a newborn elephant whose oversized ears make him a laughingstock in an already struggling circus. But when they discover that Dumbo can fly, the circus makes an incredible comeback, attracting persuasive entrepreneur V.A. Vandevere (Michael Keaton), who recruits the peculiar pachyderm for his newest, larger-than-life entertainment venture, Dreamland. Dumbo soars to new heights alongside a charming and spectacular aerial artist, Colette Marchant (Eva Green), until Holt learns that beneath its shiny veneer, Dreamland is full of dark secrets.