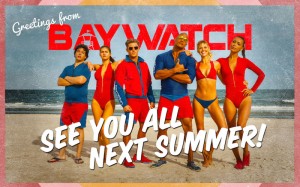 We all celebrate the 4th of July in our own little ways. Some of us like to cook ourselves some burgers. Some like to watch fireworks blow up into the sky. Others like to dip their toes in a nearby pool. But if you’re Dwayne “The Rock” Johnson, you go one step further: you release the first motion poster for your newest film, next year’s Baywatch.

The first look doesn’t offer too much. It’s mostly just a chance to see The Rock and his young co-stars, including Zac Efron, Kelly Rohrbach, Alexandra Daddario, Jon Bass, Priyanka Chopra and Ilfenesh Hadera, decked to the nines in their best American apparel behind a very prominent American flag. Although Efron and Johnson, evidentially, decided to go for the extra mile: Johnson is rocking a sparkler and his best Uncle Sam hat, while Efron got the flag painted across his muscular chest.

Suffice to say, they’re celebrating with a bang this year, and we’re hoping they provide something just as spectacular next year when the 21 Jump Street-esque film remake hits theaters on May 19, 2017.

Here’s what The Rock had to say about the upcoming movie:

In the meantime, check out the motion poster for yourself. It’s the American thing to do.