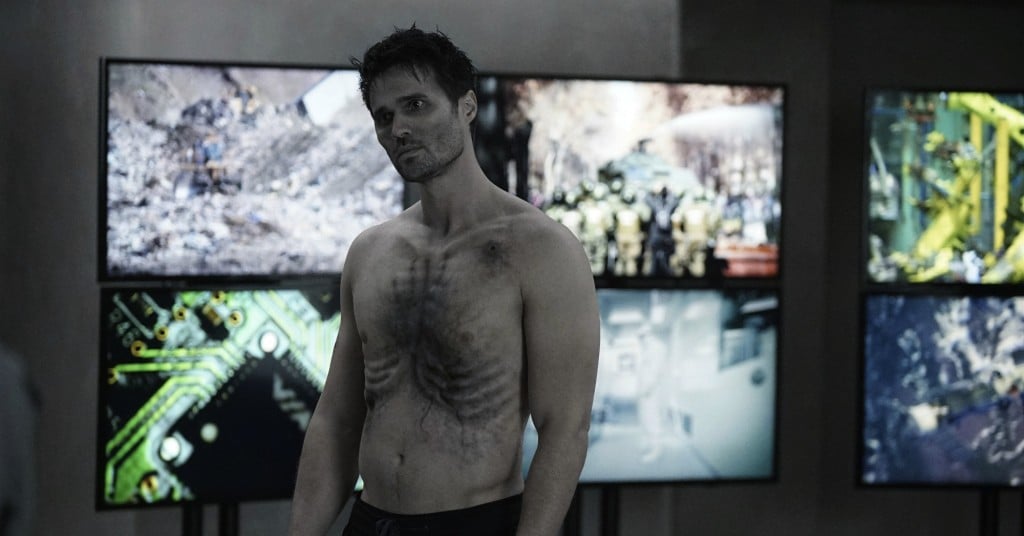 I understand that Grant Ward has amassed something of his own fandom, but you can go ahead and mark me down squarely in the anti-fandom camp. Back during the first half of Agents of S.H.I.E.L.D.‘s third season, I was advocating for an unceremonious off-screen death caused by complications from a paper cut injury. The big moment during the midseason finale was the death of Grant Ward, but even before the episode ended, it was clear that – despite Coulson brutally crushing his character’s chest – Brett Dalton would be continuing on with the show. The exact nature of Dalton’s new role in the show remains to be seen, but over the break we’ve been teasing out hints in bits and pieces. A couple weeks ago we reported that Dalton will be playing a version of the Marvel comics baddie Hive, and now, in an interview with Comic Book Resources, Dalton himself had a few things to say about how much of Ward was left in this undead monstrosity.

These are the same questions that [Gideon] Malick has, and Malick is asking the same things in his head. … Hydra has existed for centuries trying to bring this creature back, and they’ve been unsuccessful until now. And so, there’s this whole build up about ‘what’s HYDRA going to do’ and all of this stuff. And now that we’ve done it — okay, now what? What does this mean exactly? What are this guy’s intentions? Do they line up with the people on Earth and Malick and his intentions? How much Ward is left in there? Or is it just ‘it’ in the body of Ward? There’s a million questions here that we’re all kind of asking at the same time. So Malick, in a way, becomes the audience’s lens through that whole thing.

Gideon Malick, as you might recall, is Powers Boothe’s HYDRA boss and former member of the World Security Council (the guys who wanted to nuke the crap out of New York City back in The Avengers). Malick, like us, it seems, wants to know if Ward is dead or only mostly dead (which, as you know, is still slightly alive). Meanwhile, it sounds like the alien deity HYDRA has been worshipping for eons may not be exactly keen to do the bidding of a bunch of dumb earthlings.

I run hot and cold on this show – for every good idea it has, it seems to also have a bad one. My big complaint with the first half of this season was that the way every plot line ended up leading back to HYDRA making it feel like we’re going through the same story beats as the previous two seasons instead of actually breaking new ground and exploring new narrative territory. That said, even with the obvious involvement of HYDRA in this new story, I remain (perhaps foolishly) optimistic because it seems as if the status quo has been shaken up in such a way that it might be something new after all. I guess I’m looking at these upcoming episodes the same way Malick is looking at Grant Ward, wondering if this is really something new, or if it’s just a repackaged version of the same thing we’ve seen for two and a half seasons of television. I know what I’m hoping for, and yet, as we all know, in comics no one but Uncle Ben ever truly stays dead.