Robbie Reyes, A.K.A. Ghost Rider, will be making an appearance in the Season 4 premiere of Agents of S.H.IE.L.D. And in anticipation, ABC has revealed a brand new promo image showing off his full transformation, shown below.

We’ve already seen several stills Reyes in his human form, and some have wondered how close he’ll come to the Spirit of Vengeance version of the character.

Though Reyes’ origin differs quite a bit from Johnny Blaze, it’s been reported that Agents will be exploring its own unique story. Perhaps mixing a bit of Reyes’ persona with Johnny Blaze’s more traditional and familiar narrative involving the devil, or something similar. Either way, we can probably expect this “new” take to be somewhat dark and grim, as evidenced by the first promo image below. 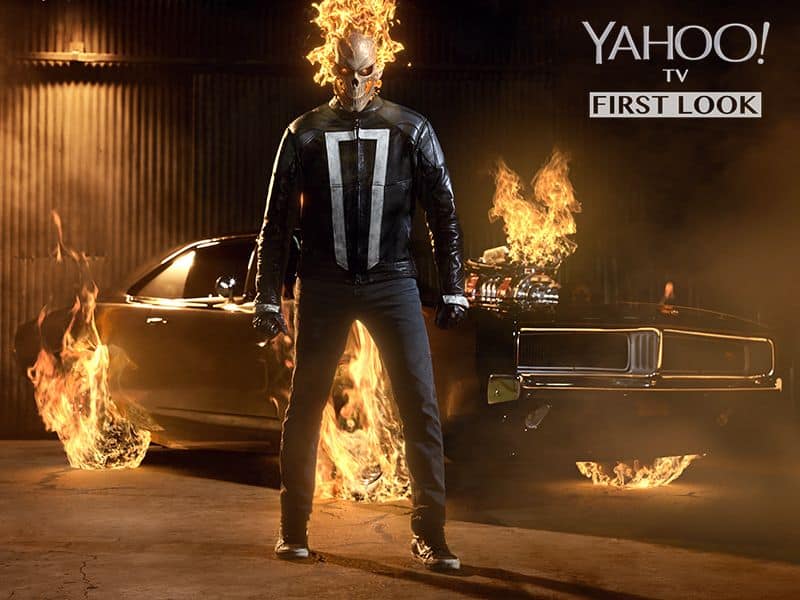 In an interview with Yahoo! TV, executive producer Jeff Bell went into more detail about how Ghost Rider “opens up a whole different kind of storytelling” for the show runners, and that his “origins present themselves as supernatural.” This is certainly a departure from the show’s roots and leaning more toward Doctor Strange, which will be released during Season 4.

It’s also been announced that Agents will now be airing at 10 p.m. on ABC. Chloe Bennet (A.K.A. Quake) spoke with Yahoo TV about this, claiming that this change will allow the show to be a lot “darker and sexier” than it previously was during primetime. This certainly makes sense if they’re deciding to incorporate a character as dark as Ghost Rider, which Bennet also points out.