This week, the Flash makes perhaps his riskiest move so far in his quest to defeat Zoom: another attempt at time travel, combined with more under-cover shenanigans. After Team Flash outed Zoom as Jay Garrick (although which Jay Garrick is somewhat debatable), Barry is willing to do anything to stop the man he thought was his friend. 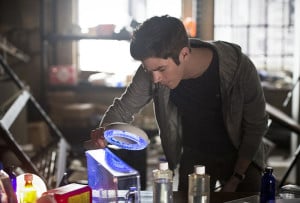 Pictured: Grant Gustin as Barry Allen, trying to figure out how to manipulate that pesky Speed Force.

Barry opens the episode with some poignant narration, “I made the same mistake twice.” Yes, this season seams to be repeating some of the key elements of last season that made it so special — more on that later. He refuses to let the story carry out the way in which he’s all too familiar, so he’s overworking himself… again. That’s when Caitlin drops a bombshell: maybe his inability to stop Zoom is not a matter of mastering of his speed, but it’s a matter of limited power.

Back at the West household, Iris breaks the news to Barry that she went on a date. Yes, that date, with that excellent, interesting, three-dimensional, sympathetic man from the last episode. She’s worried that Eddie’s death will prevent her from being able to begin another relationship. Barry assures her that no, it will not, and Eddie would want her to move on. Look, I’m just glad Iris is acknowledging the fact that her fiance lost his life less than a year ago. But yeah, I’m always in favor of Irish moving on, in any direction, because her character has been criminally flat this season. 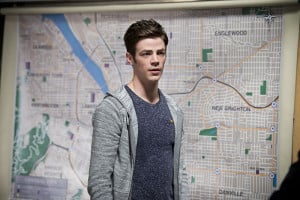 Pictured: Grant Gustin as Barry Allen, standing in front of a map.

Wally West talks about some of his boring engineering stuff, and one of his research strategies gives Barry an idea. He realizes he needs pseudo-Harrison Wells, the incognito Eobard Thawne from last season, to teach him more speed tricks. So he tells Team Flash And finally, Harry addresses something I was concerned about this whole season, yelling, “He’s not Wells — I’m Wells!” If only they would explain why Earth-2 Harrison Wells and Earth-1 Eobard Thawne have the same. Exact. Personality. Anyway, they decide to travel to the time of the Pied Piper episode, which is a nice way to bring that character back. Pied Piper was a cool character in Geoff John’s late 90s run on ‘The Flash’ comic, so I’ve always hoped they’d bring him on as a supporting character.

As soon as the Flash goes back, past-Flash immediately spots present-Flash. Present-Flash chases down past-Flash, puts him out like a light, and swaps out their lightning bolt symbols, which is a nice touch. The Flash immediately stops Pied Piper, and too-easily resolves the whole issue. Past-Team Flash seems immediately suspicious, and it raises some legitimate concern over the effects present-Flash’s actions are going to have on the future. Like, perhaps, Barry actually enlightening past-Harrison Wells/Eobard Thawne to the point where he’d have the ability to defeat the Flash after all. (And yes, these time travel entanglements are even harder to write about than they are to watch.)

At the police station, ghoul-like creatures suddenly appear through the walls, terrorizing the officers, but not doing much else. Joe, Eddie, and some other cops start shooting at them, which does nothing but scare them away. It’s both the freakiest and the un-‘Flash’-like thing to happen on the show. 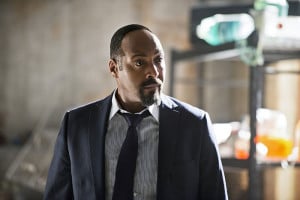 Pictured: Jesse L. Martin as Detective Joe West, calling Barry out for being weird to Eddie.

Barry is a little moved when he locks eyes with the still-living Eddie Thawne, and even Joe calls him out on it. He brushes it off and heads back to S.T.A.R. Labs, where he reveals to Team Flash that he’s seen these “dementors”, as Cisco calls them, before. Again, past-Harrison Wells/Eobard Thawne is suspicious. So suspicious that he pulls Barry aside, stands up out of his wheelchair, and knocks him out.

Barry reveals his back-up plan to Thawne, that there’s a letter for past-Barry explaining exactly how to beat Thawne, and that stops Thawne from being able to kill present-Flash. Thawne broods accordingly. 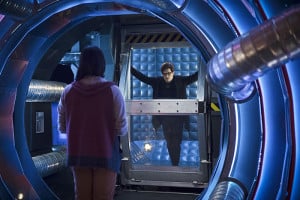 Carlos Valdes as Cisco Ramon and Andrew Mientus as Hartley Rathaway. Both of these guys look like dummies in this episode since we all know how (part of) their lives play out.

Meanwhile, just when Cisco asks Pied Piper the frequency of his noise gauntlets, S.T.A.R. Labs is invaded by the time wraiths, who are actually pretty dangerous this time. One even manages to crack the presumably impenetrable glass on Pied Piper’s cell. Pied Piper’s gauntlets hold them off temporarily with their shrill sounds, and he pretty much teams up with them for the rest of the episode.

Caitlin suggests, correctly, that Barry is the time wraiths’ target, and when she steps out of the room, Barry asks the question we’ve all been wondering: if he’s time traveled before, why hasn’t he encountered them yet? Past-Harrison Wells/Eobard Thawne reveals the simple truth: he was lucky. Later, Barry tricks Eddie into explaining on video how he feels about her, “as if he would never see her again”. While I didn’t think this was something that was ever necessarily unclear to Iris, this somehow ends up serving as closure for Iris, allowing her to date the handsome, intriguing, Prince Charming from last episode. 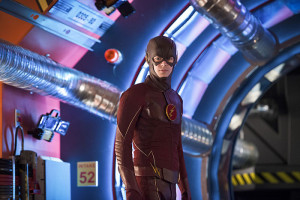 Pictured: Grant Gustin as The Flash, featuring another of DC’s famous “52” references.

Past and present Flash meet each other, awkwardly enough, and Team Flash is forced to learn the truth. Everyone’s confused, so long story short, Thawne/Wells explains that present-Flash has come from the future. Wells/Thawne shuts down any conversation about the ramifications of Barry’s time travel, which is probably for the best since there’s so many directions it could be taken.

Before they can leave to stop the time wraiths, present-Barry whispers to Cisco that Pied Piper knows where Ronnie is, which is a perfect nod to in-universe continuity minutiae. Present-Barry heads back to present time, only to be slowed by the time wraith, whose purpose and motivation is unknown, and the reveal that up-close they look like tattered, zombie version of the Flash gives me hope that their origins will be explored in upcoming episodes. 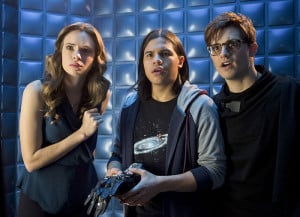 Present-Barry makes it back home to his present time, only to find that Pied Piper has become something of a member of Team Flash. He heads off to dinner with his parents, who were the source of most of his formerly villainous rage. He’s a good guy now! 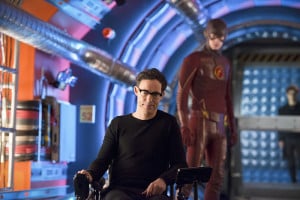 Pictured (L-R) Grant Gustin as The Flash and Tom Cavanagh as the more evil, but more successful, Harrison Wells.

Present-Harrison Wells reveals that while he used to only care about science, now he cares about his daughter Jesse. All of his plans keep backfiring, and it’s true; this guy hasn’t been much of a success. Maybe Team Flash is so used to the idea of a genius Harrison Wells that they’re cutting this guy way too much slack? I doubt that’s the direction they’re heading with his character, but it’ll be interesting to see his arc play out.

Barry then goes to see Iris, who is still re-mourning the loss of Eddie. Barry shows her the video, and she weeps. He essentially tells her that his love for her means he wants her to pursue whatever makes her happy. Oh, please, please let this mean she can actually date that cool, flawless, exciting man from last episode! Like Barry tells her, we always need to be moving forward! And yeah, I don’t think Barry’s going to be going back in time anytime soon. 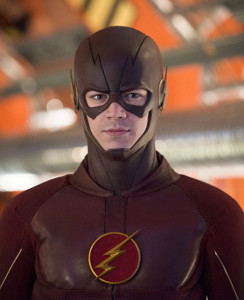 Pictured: Grant Gustin as The Flash, who probably won’t be time-traveling any time soon.

As I mentioned in my recap of last week’s episode, ‘The Flash’ had achieved much more momentum at this point in the season. I believe that was mostly due to Harrison Wells’ reveal as the sinister Eobard Thawne, but Zoom’s reveal as Jay Garrick just doesn’t hold the same gravitas. Even the strong character development is lacking; Iris has very little to do, Wally is a temperamental brat, and even Barry has become less empathetic after his relationship with Patty Spivot puttered out. And, worst of all, Caitlin Snow, who should definitely be making steps toward her Killer Frost transformation by now, has a character arc that’s essentially a reboot of her arc from last season: super-powered boyfriend dies, she copes with her emotions. Let’s just hope the storytelling can ramp up the intrigue and put these characters back into interesting places.

“Flash Back” was directed by Alice Troughton and written by Aaron Helbing and Todd Helbing. ‘The Flash’ returns next month on Tuesday, April 19th at 8/7c on the CW.