Entertainment Weekly has unveiled the world’s first look at the highly-anticipated final season of Game of Thrones.

Fans everywhere are dying to know when they will get their final six episodes from Westeros and until that news comes, EW has dropped something to tide audiences over with. The first official image comes from the cover of their latest issue with the Seven Kingdoms’ new favorite couple: Jon Snow and his aunt Khaleesi. The two are gearing up for what promises to be the biggest season the show has ever pulled off. You can check out the cover below. 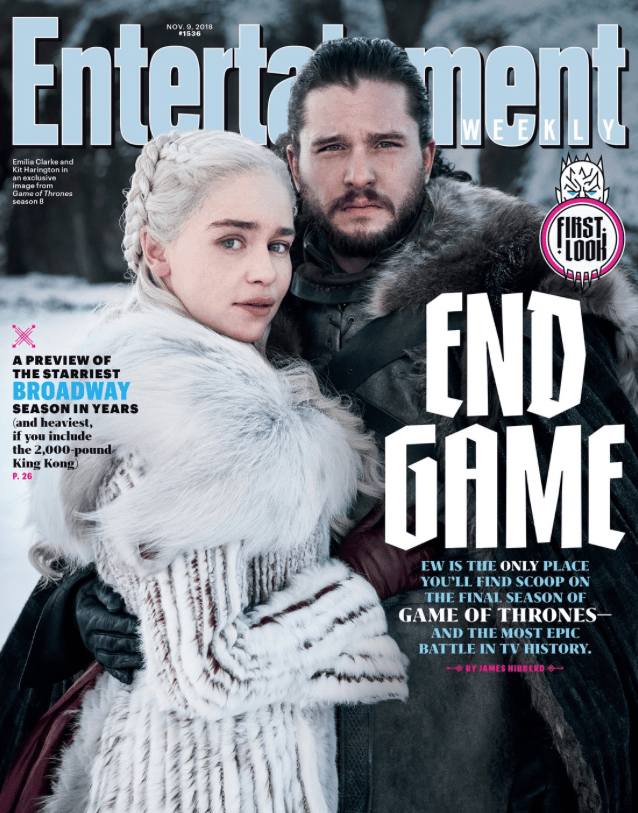 The mysterious storyline for the last outing of Game of Thrones has been kept under wraps. But co-executive producer Bryan Cogman did unveil some hints at what viewers can expect from their last trip to Westeros.

“It’s about all of these disparate characters coming together to face a common enemy, dealing with their own past, and defining the person they want to be in the face of certain death. It’s an incredibly emotional haunting bittersweet final season and I think it honors very much what [author George R.R. Martin] set out to do — which is flipping this kind of story on its head.”

It seems the final season will have everyone on the edge of their seat and will see the characters as we have never seen them before. This final season has been no walk in the park apparently. The cast and crew endured a rough shooting schedule during production. They are not taking any chances and going out of their way to make sure every detail is as excellent as possible, according to actor Kit Harington.

“It’s relentless; scenes that would have been a one-day shoot five years ago are now a five-day shoot,” Harington says. “They want to get it right, they want to shoot everything every single way so they have options.”

Actress Emilia Clarke also confirmed that some serious attention to detail was going on while they were filming. According to the Mother of Dragons, they are definitely going big for their last hurrah.

“[Camera] checks take longer, costumes are a bit better, hair and makeup a bit sharper — every choice, every conversation, every attitude, has this air of ‘this is it.’ Everything feels more intense.”

What are your thoughts on our first look at season 8 of Game of Thrones? Share them in the comments below!

The final season of Game of Thrones will premiere sometime in 2019.