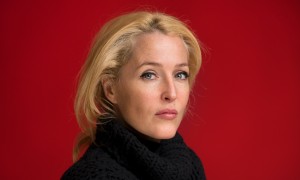 Earlier this year, rumors spread regarding Gillian Anderson as a potential replacement for Daniel Craig in future James Bond films. She joins the ranks of Idris Elba, Tom Hiddleston, Emily Blunt and Damian Lewis, amongst others, who’ve been considered a potential candidate for the position. Though The X-Files veteran has expressed interest in the iconic role, most notably tweeting a photoshopped 007 poster with herself in the center, she hasn’t addressed the proposition — until now.

Promoting the newest season of her BBC Two series The Fall, Anderson spoke about the possibility of becoming the most famous secret agent in the world.

Here’s what Anderson had to say when asked if she could reinvent the classic character.

Not necessarily. I think maybe we can reinvent what Bond is. Maybe he doesn’t have to fit into that paradigm. But it was flattering. It was a fun little thing that ran for a little while.

With Craig seemingly uninterested in returning to the role, who will play 007 in the newest movie is anyone’s guess. Anderson isn’t invested just yet, but she’s not turning down the high-profile job either. But in any case, whether it’s Craig, Anderson or someone else in the role, expect to see Bond return to the screen in the near future.