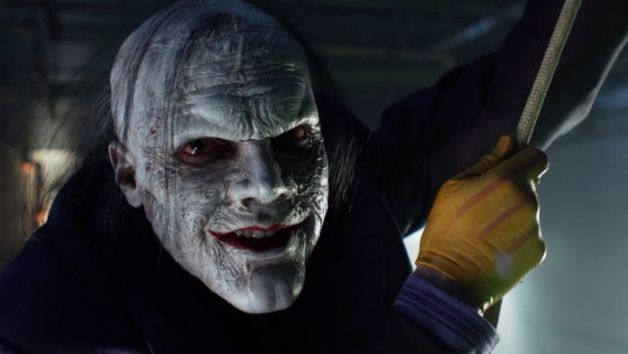 With Gotham now officially over the actors are spilling additional details about their characters including Cameron Monaghan gave us a behind the scenes look at the original look for his version of the Joker.

The image of Gotham‘s Joker came from Cameron Monaghan’s official Instagram account. The look, however, was a bit different then what was ultimately aired on Gotham. You might remember that Cameron Monaghan’s version of the Joker appeared to have aged significantly with plenty of wrinkles on his face and only a few thin strands of hair, clearly separating it from other versions of the Clown Prince of Crime. But it appears that the original look for Gotham‘s Joker wasn’t quite as extream.

In the image that Cameron Monaghan shared, this version of the Joker was clearly loosing hair but it wasn’t the same extream that we ultimately saw on Gotham. On a similar note, his face, while clearly aged well beyond his natural years, wasn’t quite as extream. It almost seemed that originally Gotham‘s producers wanted a bit more of a traditional look for Cameron Monaghan’s Joker before ultimately deciding to go a different route.

You can see the original version of Cameron Monaghan’s Joker below:

From the look of things, Cameron Monaghan’s Joker for Gotham went through several tests before they finally settled on what showed up in the final season!

What do you all make of this image? Did you like the version of Cameron Monaghan’s Joker that appeared in Gotham? Should they have gone a different route? Let us know what you think in the comments below!

Here is the official synopsis of the series finale of Gotham:

The first official photos from Terminator: Dark Fate are here and they feature Arnold Schwarzenegger and Linda Hamilton.

You can check out the first Dark Fate photo below and click "next" to view the rest of the gallery!

Deadpool helmer Tim Miller is directing the film from a script written by Billy Ray, David S. Goyer, Justin Rhodes, Josh Friedman, and Charles H. Eglee. The script was developed in a writers room to stand on its own while simultaneously forming an overarching storyline for what is planned to be a new trilogy of movies.

Dark Fate will introduce newcomers Mackenzie Davis and Natalie Reyes, as well as Gabriel Luna (Marvel's Agents of S.H.I.E.L.D.) who plays a brand new Terminator in the film. Plot details remain under wraps, but Miller's project is a direct sequel to Judgment Day, ignoring all the other films in the franchise.

Terminator: Dark Fate opens in theaters on November 1, 2019. Stay tuned to Heroic Hollywood for the latest news on the series.