Gotham has revealed the first official look at Lili Simmons who replaces Camren Bicondova as an older Catwoman in the upcoming series finale.

Camren Bicondova took to social media to announce yesterday to announce she would be passing the baton to Lili Simmons who will portray an older version of Selina Kyle aka Catwoman in the series finale of Gotham. The final episode Gotham is set to feature a 10-year time-jump giving us older versions of David Mazouz’s Bruce Wayne/Batman and Camren Bicondova’s Catwoman. Leaked images of Lili Simmons’ version of Selina Kyle/Catwoman surfaced earlier this year but this new image gives us our first official look at the actress in the role.

You can check out the first look at Lili Simmons replacing Camren Bicondova as Catwoman in Gotham below! 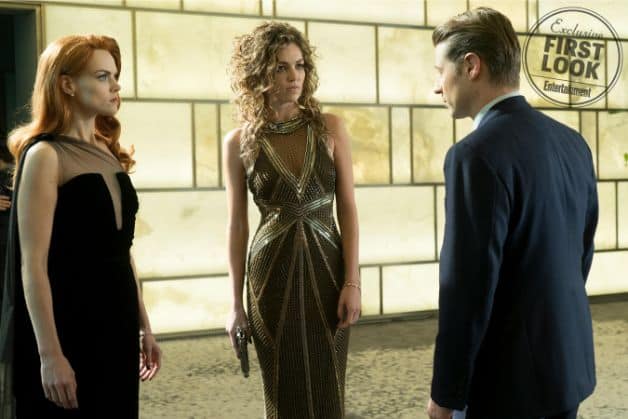 So what do you think? Does Lili Simmons look like a good replacement for Camren Bicondova’s Catwoman? Are you sad Camren Bicondova won’t be reprising her role in the finale? Let us know in the comments below!

Not only will the series finale of Gotham feature an older Batman and Lili Simmons replacing Camren Bicondova as an older Catwoman, but Cameron Monaghan is also finally becoming The Joker. His final Joker form appears to be inspired by his Earth-2 iteration which first appeared in Justice League Of America Annual Vol. 3 # 1 back in 2008. In the comics, Earth-2 Joker is already an old version of himself. After he fought Batman for years, he allegedly killed the Caped Crusader. But even with his age and disabilities, he’s still fighting against Batman supporters like Robin or Huntress, which is Batman’s daughter Helena Wayne in this universe. Although it’s more likely we’ll see an early version of the Joker in Gotham, who’s just starting his feud with Batman, their looks are very similar.

The series finale of Gotham airs next week and you can read the official synopsis below!