Entertainment Weekly has unveiled a new cover featuring Halloween star Jamie Lee Curtis taking a stab at a pumpkin with Michael Myers’ face carved into it.

Director David Gordan Green’s Halloween sequel will ignore all previous entries in the film series, with the exception of John Carpenter original horror classic. This means that Jamie Lee Curtis’ Laurie Strode has been preparing for Michael Myers return for 40 years and the acclaimed actress commented on the state of her character when the sequel begins:

“She was really unhinged from the whole experience. The woman we meet 40 years later is really a walking example of PTSD.”

While Green co-wrote the script with Danny McBride, who is best known for his comedic work on projects including HBO’s Eastbound & Down, the director assured potentially concerned fans that he and McBride attempted to honor Carpenter’s vision:

“We’re really trying to honor Carpenter’s vision. Danny said a really smart thing: ‘Until there’s killings, there’s no jokes. Let’s not give anybody anything to laugh at until we’ve scared them s—less.'”

You can check out the cover below! 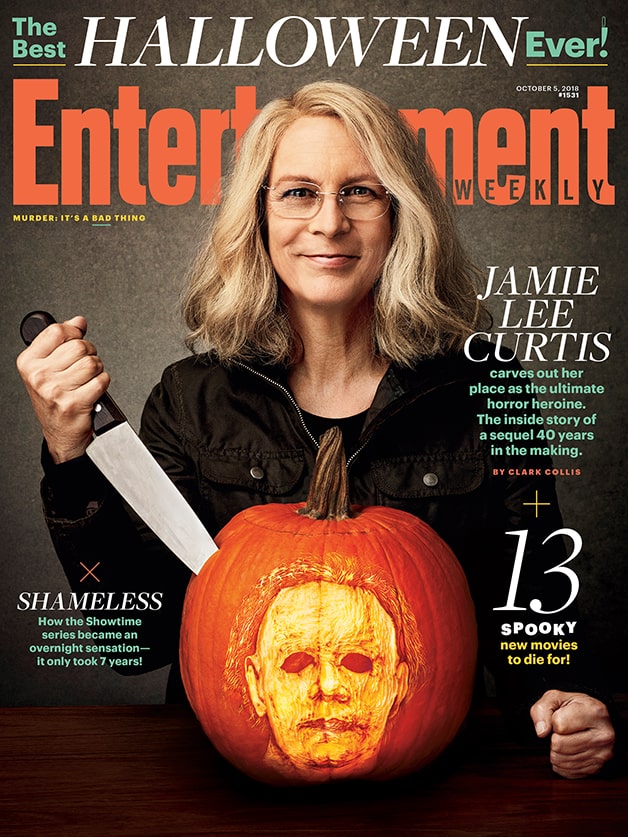 ‘Halloween’ 2018 Almost Reshot The Ending Of The Original Film

Are you excited to see the Halloween sequel? Share your thoughts below!

Jamie Lee Curtis returns to her iconic role as Laurie Strode, who comes to her final confrontation with Michael Myers, the masked figure who has haunted her since she narrowly escaped his killing spree on Halloween night four decades ago

Halloween will be released in theaters on October 19, 2018.