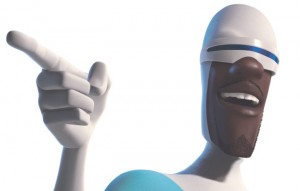 Though Samuel L. Jackson is known for his role as former S.H.I.E.L.D. director Nick Fury in the Marvel Cinematic Universe films, it was not the actors first foray into the superhero genre. Having provided the voice of Lucius Best, a.k.a. Frozone, in Pixar’s The Incredibles, Jackson will reprise his role as the ice-powered hero in the film’s highly anticipated sequel. In an interview with Collider, Jackson briefly discussed his work on The Incredibles 2 and explained why he was not surprised when the sequel was announced.

Jackson discussed his time working in the recording studio and what he believes fans are looking forward to seeing the most.

“I’ve been in the studio one day so far. One day so far, but I don’t know if that’s a dedicated recording or pre-recording, so they could start to animate against what I said. I think it’s going to be pretty awesome. Everyone’s been waiting to see, more than anything, what Jack-Jack evolved into.”

Jackson revealed that he and director Brad Bird had discussed the possibility of an Incredibles sequel before it officially moved forward.

“Brad’s always said that. Every time I ran into him he said, ‘We’re going to do it, we’re going to do it,’ and he was off on track doing some live-action stuff, I guess expanding his horizons as a director in the kinds of movies he could and the kind of opportunities that he had. So I’ve always thought it was possible.”

Frozone’s humorous efforts to assist the Parr in the final act of The Incredibles, despite the objections of his wife, offered one of the most memorable moments of the first film. We can only hope Samuel L. Jackson will able able to provide more comedic moments in the sequel to the Academy Award winning first film.

The Incredibles 2 is scheduled to be released in theaters on June 15, 2018.