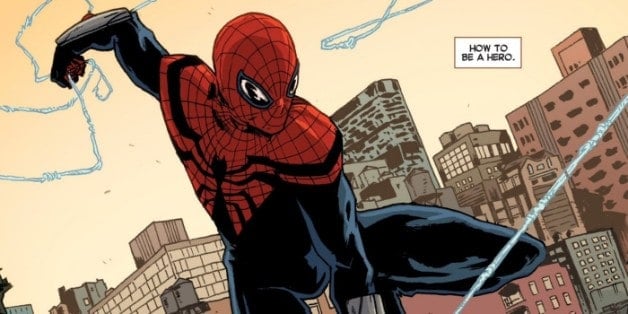 Marvel fans were surprised today when leaked set photos from the production of Spider-Man: Far From Home revealed Peter Parker would be donning yet another suit in addition to the previously leaked stealth suit seen on set in Europe.

Naturally, fans have a lot to say about the newly revealed black and red costume seen in set photos as Spider-Man swings into the air with Zendaya’s Michelle. The costume, which could be based on unused concept art from the previous Spider-Man film, Spider-Man: Homecoming, is drawing Superior Spider-Man costume comparisons from fans.

You can check out some of the reactions below.

This is basically an MCU rendition of the Superior Spider-Man costume. pic.twitter.com/HEXf1cMJc4

The leaked (new) Spider-Man costume looks somewhat similar to the a piece of concept art before Captain America: Civil War. There's more red in the actual one, but they looked similar. #spidermanfarfromhome pic.twitter.com/JTZfrSvgb8

It might be my least favorite live action Spider-Man suit

Aw come on, man. It's MCU Spider-Man, I gotta find SOMETHING to be excited about. Plus, of course he was gonna switch costumes every movie, Cap and Iron Man have gone through like dozens of looks. It's sort of an MCU tradition. https://t.co/E2MIcIid5I

Name one character in the MCU that hasn’t had constant costume changes.

Spider-Man has been in the Homecoming suit for Civil War, Homecoming, the beginning of Infinity War, And the first half of this.

I like the new suit for Spider-Man Far From Home. It has a Superior Spider-Man feel to me and the white spider I feel like is inspired by Insomniac Spider-Man. pic.twitter.com/EvVTEO5hFG

Production on the project is currently underway in New York. Details on the plot are currently under wraps, though the film will follow Peter Parker, moments after the end of Avengers 4 as he joins his friends on a summer vacation in Europe and stars Jake Gyllenhaal as Mysterio. Introduced in The Amazing Spider-Man #13, best incarnation of Mysterio is a special effects wizard named Quentin Beck and the character has been a frequent foe for the web-head since his debut.

Spider-Man: Far From Home will be released in theaters on July 5, 2019. Stay tuned to Heroic Hollywood for the latest news on the future of the Marvel Cinematic Universe as we learn it.