Is Jake Austin Playing The Flash’s Wally West On ‘Stargirl’?

Speculation runs rampant as fans seem to think that actor Jake Austin has been cast as Flash character Wally West in the Stargirl series which was not at all helped by the actor’s own Tweets.

The source of the speculation came from a Reddit post where someone shared the news that actor Jake Austin Walker had been cast in an unknown role for the upcoming Stargirl show. Given the actor’s appearance, however, most of the commenters immediately jumped to the thought that the actor may be playing Wally West. The actor appears to have reddish hair which is the same hair color that Wally West and Geoff Johns had previously said that this version of The Flash could appear on the show. This speculation was only been fueled by the actor’s own Tweets.

In a now-deleted Tweet, Jake Austin posted a picture of Wally West where he vowed to play this version of The Flash. He retweeted this old Tweet where he stated that “A kid can dream.” The original post of Wally West has since been deleted but was not deleted before people could take a screenshot of it.

You can see a screenshot of this Tweet below: 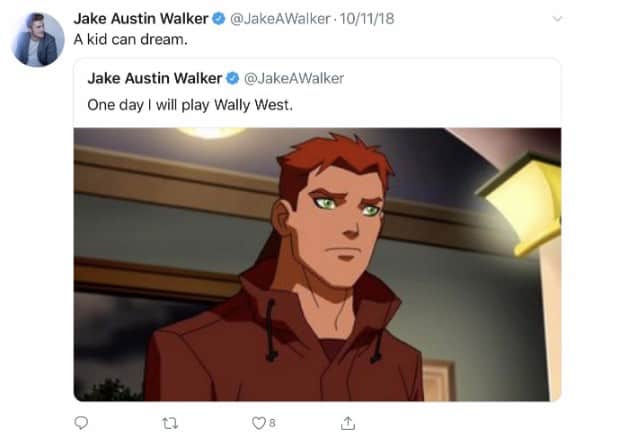 From the look of things, the Stargirl actor may need to watch his Tweets in the future!

What do you all make of this theory? Would you like to see this version of The Flash appear on Stargirl? What do you make of the casting of Jake Austin? Let us know what you think in the comments below!

Here is a plot synopsis for the upcoming show:

Stargirl is scheduled to debut on DC Universe in August 2019.