In a Q&A on Instagram, director James Gunn discussed whether The Batman will crossover with with his take on The Suicide Squad.

James Gunn recently took to Instagram to talk to fans about the projects he’s working on at the moment and his experiences working in Hollywood. The director also addressed whether The Batman would crossover with The Suicide Squad. Given that many Suicide Squad characters in the comics have crossed paths with the Caped Crusader before, it wouldn’t be surprising if James Gunn’s The Suicide Squad utilised that connectivity — especially with Matt Reeves’ The Batman also on the horizon.

But unfortunately, when asked if he had discussed villain crossovers with Matt Reeves’ The Batman, James Gunn said that they hadn’t. However, he thinks The Batman director knows which villains are in his script. Given that Warner Bros. and DC are attempting to keep their future films relatively self-contained and just focus on those characters rather than a precisely interconnected universe, this makes sense. Take a look at James Gunn explaining that the villains won’t cross between the two films below. 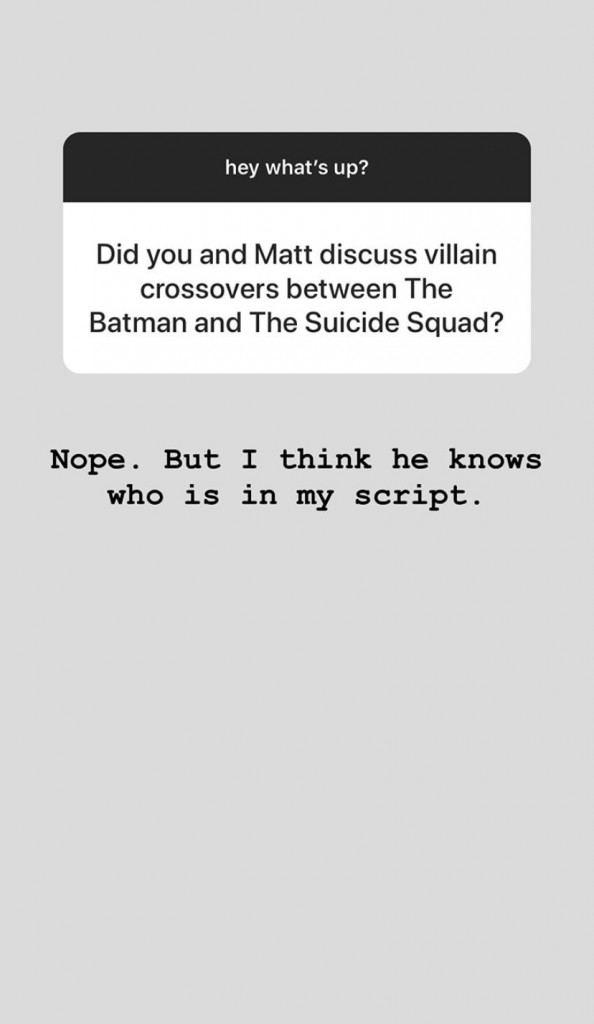 Are you excited to see James Gunn’s The Suicide Squad? Would you want to see The Batman crossover into other films? Let us know in the comments section!

The first Suicide Squad followed a team of supervillains who were recruited by the government for a dangerous black ops mission in exchange for reduced sentences. The ensemble cast included Will Smith as Deadshot, Margot Robbie as Harley Quinn and Jared Leto as The Joker. James Gunn’s The Suicide Squad is expected to deliver on the fresh take on the titular team.