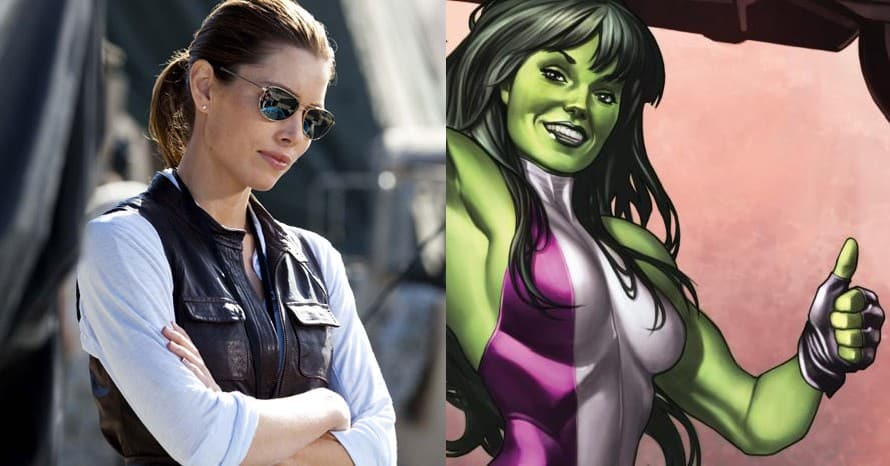 A new piece of fan art imagines Jessica Biel as She-Hulk for the character’s highly-anticipated Marvel Studios Disney Plus series.

A digital artist who goes by “Apexform” on Instagram has shared this artwork that pictures Jessica Biel as She-Hulk for the Marvel Cinematic Universe. As of right now, casting is alleged to be underway for all of the Disney Plus series that Marvel have announced, and that would include key characters for the She-Hulk series.

You can check out the artwork of Jessica Biel as She-Hulk for Marvel Studios below.

As of right now, no casting news on She-Hulk has been made available, so it remains to be seen if Jessica Biel is even the type of actress that Marvel Studios may be interested in for the character. Earlier this year, Hulk actor Mark Ruffalo shared his excitement for the She-Hulk series, and it seems likely that his presence may be required in order to explain She-Hulk’s origin. Also known as Jennifer Walters, She-Hulk is Bruce Banner’s cousin in the comics, and when she is nearly fatally injured and is left stranded, Banner has no choice but to give her a blood transfusion to save her life. The process ends up saving her life, but upending it as she becomes She-Hulk. Unlike her cousin, however, Walters seems to get a better handle on her rage-powered alter-ego and finds herself more comfortable as an emerald-skinned amazon than the mild-mannered, insecure person that she used to be.

She-Hulk will be one of many Marvel Studios-produced series developed for Disney Plus, Disney’s streaming service that will go online next month. It is expected to arrive sometime in 2021 or 2022. Some fans have also speculated that She-Hulk could serve as Peter Parker’s lawyer in the third Spider-Man movie from Marvel Studios as he deals with his identity crisis, but as no plot details have been officially been confirmed for that movie, that remains speculation.

In addition to She-Hulk, Marvel Studios is also developing a slew of other MCU projects for the Disney Plus streaming service. For example, there’s WandaVision, which will star Elizabeth Olsen alongside Paul Bettany. The Disney Plus series is said to focus on Scarlet Witch after the events of Avengers: Endgame and will lead into Doctor Strange in the Multiverse of Madness.

Meanwhile, Loki is reportedly planning to start filming in early 2020 with Tom Hiddleston reprising his role as the God of Mischief. However, Loki’s series will follow the version of the character who used the Space Stone to escape capture when the Avengers traveled back in time in Endgame.

Additional Marvel Studios series being developed for Disney Plus include The Falcon and the Winter Soldier, Hawkeye and an animated What If? show featuring Jeffrey Wright as The Watcher.