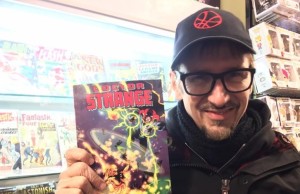 “Joe Russo actually has a lot to do with me getting this job. My best friend is Joel McHale, who worked on Community [with the Russos], so Joel knew Joe, and they were good friends. So I went to Joe and asked him how he got his job, so Joe got in my corner and gave me a little bit of the inside scoop on how Marvel works. We all support each other. Everybody’s working together.”

It’s good knowing that people at Marvel are consistently helping each other out. This gives us great insight into how collaborative the studio is. Derrickson went on to discuss the help he got from Guardians of the Galaxy director James Gunn while developing Doctor Strange.

“Everybody talks to everybody. I got notes on the Doctor Strange script from James Gunn, and I talk to him every once in awhile, ask him questions.”