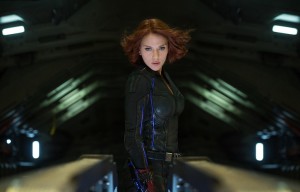 When the cast and crew of Avengers: Infinity War released a video announcing that production on the film had begun, fan attention shifted towards the highly anticipated sequel despite the fact that the film is still over a year away from hitting theaters with four other Marvel Studios productions slated to be released beforehand. Billed as the culmination of the Marvel Cinematic Universe story, Avengers: Infinity War will bring together several of our favorite superheroes in the fight against the Mad Titan Thanos. One of those heroes will be Black Widow, played by Scarlett Johansson, who recently discussed the production on Infinity War and the upcoming release of the controversial live-action adaptation of Ghost in the Shell in an interview with MTV News.

When asked for an update on a Black Widow solo film, Johansson stated that her focus in on Infinity War for the time being.

“I don’t. I don’t know at this point. I’m still trying to wrap my head around the Infinity War, which the production is an infinity, and then I’ll let you know afterward.”

Johansson explained how Joss Whedon, who directed the first two Avengers films, has discussed the possibility of a Black Widow solo project.

“We talk about it all the time, it’s what we text each other back and forth.”

Johansson also revealed how she is feeling about the upcoming release of the controversial Ghost in the Shell live-action film.

“I’m ready for Ghost in the Shell to spread it’s wings and fly. I’m gonna be seeing it next week for the first time, so I’m nervous but I’m excited.”

You can watch the entire interview in the post below!

Scarlett Johansson had previously discussed the prospects for a Black Widow film, explaining that the busy schedules of both herself and Marvel Studios were the reason behind the delay.