Panic in the streets. Chaos reigns. Thomas Wayne running for mayor. And one insane Joker in the center of it all. Since there’s no Batman involved with the Todd Phillips Joker film, then that means trouble must be reined in by Gotham City’s finest. Given how corrupt we’ve seen the police of Gotham City be, especially in Gotham on FOX, this doesn’t instill a lot of confidence. Nor should it.

Still, that doesn’t mean that Gotham’s finest can’t try, and they are on their way to New York to keep the peace, as you can see in this photo of a Gotham City Police Department cruiser being transported to New York City, where Todd Phillips is currently filming the Joaquin Phoenix Joker film. Given how corrupt and downright ineffective Gotham’s police can be, and on the off chance that the movie doesn’t have that one ray of light on the force in the form of James Gordon, chances are the cops may still be corrupt in the Joker film. 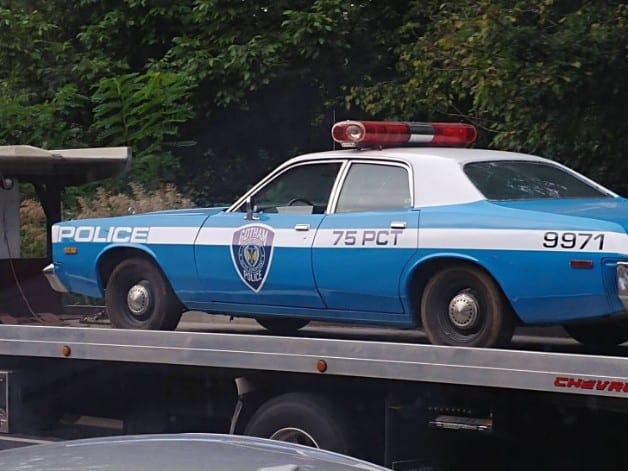 The style and design of the Gotham City Police Department vehicle looks like it was ripped right out of the 1970s and 1980s, so that could hint at the feel of the era in which Todd Phillips is setting the Joker film.

Since there’s no Bruce Wayne involved, would you want to see perhaps a rookie Jim Gordon as a member of the Gotham City police force in the film? After all, you already sort of have that with Ben McKenzie’s take on Gordon in Gotham, minus any interaction with Thomas Wayne in that series. If not, what characters from Batman mythos would you like to potentially see in the Joker film? Let us know in the comments below.