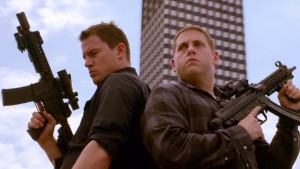 Among the weirdest potential mash-ups in Hollywood is MIB 23, a blockbuster comedy that, as the title suggests, would bring together the worlds of 21 & 22 Jump Street and the Men in Black films. Progress remains slow on the potential collaboration, though. James Bobin (The Muppets) became attached to direct it earlier this year, but that was before Alice Through The Looking Glass hit theaters. Word on the picture has stayed quiet since, and according to Jump Street star/producer Jonah Hill, there’s probably a good reason why that’s the case.

Hill, who apparently authored the wild idea, seemed dubious about its prospects when interviewed by Toronto Sun. Promoting his new films War Dogs and Sausage Party, he said the following about the potential spin-off sequel.

I had an idea, but I doubt that movie will get made… It’s too complicated. They’re trying to make all the deals, but it’s kind of impossible with all the Men in Black stuff. The Jump Street films were so fun to make and the whole joke of them was they were making fun of remakes and sequels and reboots and then now it’s become a giant sequel, reboot. It’s almost become what we were making fun of and it’s hard to maintain that joke when it’s so high stakes.

At least Hill remains self-aware. Although rumors of a fall production were speculated, Sony hasn’t confirmed anything, and they haven’t officially talked about the film since this spring. While Hill and co-star Channing Tatum would reprise their Jump Street roles of Schmidt and Jenko, respectively, Will Smith’s Agent Jay and Tommy Lee Jones’ Agent Kay would be replaced by younger actors, as is tradition in Hollywood. Still, Hill remains moderately hopeful towards MIB 23‘s future.

I love Channing and I love (directors) Phil Lord and Chris Miller and I love making those movies — they’re a lot of fun. So I hope it works out.

If MIB 23 doesn’t end up coming together, the actor/writer/producer has a number of different projects to tide him over. He’ll lend his voice to How to Train Your Dragon 3 in 2018, for instance, and he’s set to star in the new Netflix series Maniac with his Superbad co-star Emma Stone. Additionally, Hill will soon make his feature directorial debut with Mid-90s, a coming-of-age LA tale inspired by Kids and This is England. That starts shooting in February, according to Collider. I’m glad that film is gearing up in front of cameras for sure.