If there’s one thing you can definitely say about director Zack Snyder, it’s that the man has an eye for detail, even beyond his comic-based films. That can be applied to Man of Steel and Batman v Superman: Dawn of Justice for sure, but as you know by now, Justice League is a different story as far as the version that fans and moviegoers alike saw in theaters. We’ve seen the effect of Snyder’s original vision when it was edited by committee and directed under Joss Whedon, but since then, fans have long hoped to see Snyder’s vision come to light.

And as far back as the film’s opening weekend release, there have been hints, scenes, videos, and clues hinting at a grander, more interconnected Justice League compared to the one released. And Zack Snyder has made it clear many times that not only does he stand with the fans wanting to see his cut released, but he has no shortage of clues and photos to share from that original vision. The Darkseid mural was a huge one, but let’s talk about the King of the Seven Seas.

In a recent interview, Jason Momoa discussed how the upcoming Aquaman picks up directly where Zack Snyder’s take on Justice League left Arthur Curry, with him meeting Mera and Vulko and Arthur ready to head home to see his father. We’ve seen glimpses of that as far back as the first reveal of Mera, which you can see in the photo above, and the scene in the first teaser for Justice League which showed Arthur Curry on the back of a pickup truck, which Momoa referenced in the aforementioned interview.

So earlier today, Zack Snyder shared a black and white image on Vero from his cut of Justice League that shows Arthur walking by the sea while two others, presumably Mera and Vulko, watch. Accompanying this image is the caption “I’m going home to see my dad.” Here, have a look at the image below. 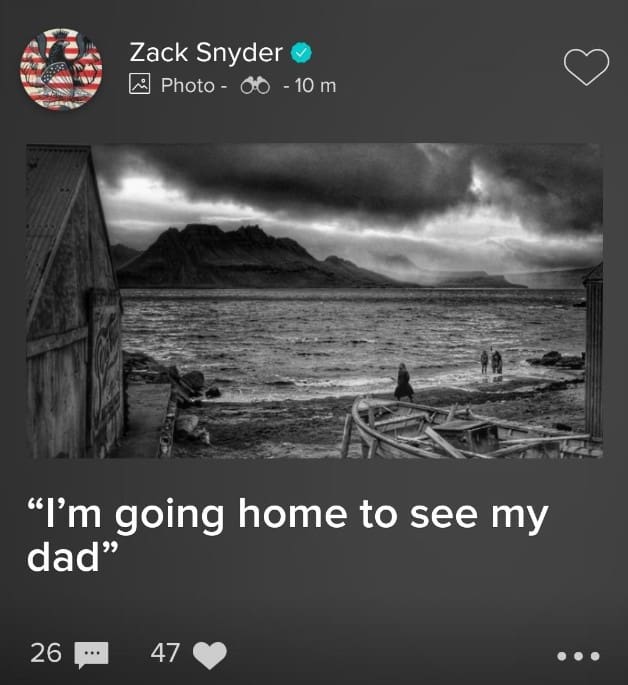 With all of the images and clues that have been shared not just by Zack Snyder, but in interviews with other cast and production members of Justice League, it feels like one massive jigsaw puzzle coming together that would ultimately culminate in Zack Snyder’s original vision of Justice League. We’ll see what hopefully ends up as the final result, but what do you think of this reveal? Would you have wanted to see Arthur’s original ending, given how it ties into the Aquaman film? Let us know in the comments below.

Justice League is available now on Digital HD, 4K, Blu-Ray, and DVD. Aquaman will swim into theaters on December 21.