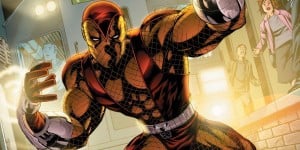 With yesterday’s news revealing that actress Zendaya’s mystery role was, in fact, Mary Jane Watson, we have even more news surrounding Spiderman: Homecoming. A call sheet for next year’s film featuring the webslinger in the Marvel Cinematic Universe has surfaced online. The sheet lists more than 30 characters for the upcoming film as well as the actor/actress who will be playing them. For a while, we have known that actor Bokeem Woodbine would appear in the film as a possible villain, but lips were sealed as to which bad guy he would be. It was assumed for a while that he would have a smaller role, perhaps as a henchman that Spiderman would have to deal with. Thanks to the leaked call sheet we now know who he will be in next years film.

Woodbine will play Herman Schultz AKA “The Shocker,” a supervillain who was associated with “The Sinister Six” and “The Masters of Evil” who wore a special suit as had Vibro-shock gauntlets that made him a formidable foe for Peter Parker. With The Vulture also in the film, this looks like we might possibly be getting at least the groundwork load for The Sinister Six with these who appearing as villains in the film.

The casting sheet also confirms many other actors and the characters they will be playing. Angourie Rice from The Nice Guys will be playing Betty Brandt who in the comics was a co-worker of Peter Parker when he worked at “The Daily Bugle.” The roles for Selenis Leyva, Martin Starr, Hannibal Buress, Tunde Adebimpe, Abraham Attah and many others are also listed on the call sheet. One interesting role is Kenneth Choi, who previously played one of the Howling Commandoes in Captain America: The First Avenger would be playing the principal in the film. However, his character’s name is Principal Morita, seeming to confirm that he would be playing the grandson of his character from the Captain America film.

Below is the call sheet.